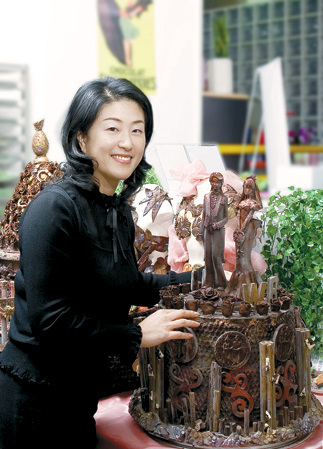 Kim Seong-mi, the first chocolatier in Korea, with a wedding cake that she made from chocolate.

When Forrest Gump sat on his famous bench in the movie of the same name, he said, “My momma always told me, ‘Life is like a box of chocolates. You never know what you’re gonna get.’”
Kim Seong-mi can sympathize with Mr. Gump’s mother. She may appear to be an average Korean housewife, but she has a dark and creamy side that’s worthy of the hit movie “Chocolat.” Like the Juliet Binoche character in that film, Ms. Kim has been making confections that drive her customers crazy with joy.
The young professor of bakery at Suwon Women’s College is Korea’s first certified chocolatier, an expert in the chocolate arts who makes sculptures using chocolate. She also makes mini-chocolates that are much in demand.
Apart from teaching her students how to make chocolate towers and teddy bears, she sells her work at Pas de deux, a store located in the food court of the Galleria department store in Apgujeong, southern Seoul.
She makes her masterpieces at a workshop in Gangnam near the Seoul Express bus terminal. 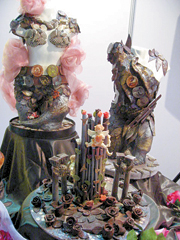 In the last couple of days Ms. Kim has been so busy she has barely slept, thanks to the proximity of Valentine’s Day. This is the time of year when chocolatiers and dentists prepare to get rich. In Ms. Kim’s case she has been trying to keep up with large orders from department stores.
Although she says she doesn’t know how much chocolate she makes, she estimates that 90 percent of her annual revenue is made in February and March.
Ms. Kim has never regretted becoming Korea’s first chocolatier. Despite being surrounded by the sight and smell of chocolate every day she never tires of her product. “I think life would be more boring without chocolate.” The young chef says she teaches two days a week and works the other five at her shop in Banpo. To recharge her batteries she takes two annual trips abroad.
She introduced her work to Seoul through an exhibition that was proposed by the wine shop manager at the Galleria store.
“Although I can’t handle alcohol, I love wine culture,” she said. “I made many visits to the Galleria wine shop and became close friends with the manager. He invited me to join a newly formed wine club. In return I wanted to give him some chocolates I had made as a present. The manager loved them and contacted the marketing team at the department store and then my first exhibition was held.”
The chocolatier said the response she got from shoppers was far better than she expected. 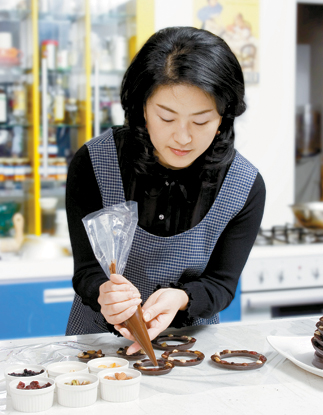 Ms. Kim learned how to make chocolate at Le Cordon Bleu school in London between 1999 and 2001. Ms. Kim, a professor at the Suwon Women’s College, runs her own chocolate store, Pas de deux, in the food court at the Galleria Department Store in Apgujeong, southern Seoul. Provided by Kim Seong-mi

“I could tell they marveled at my work. I realized chocolate culture was unfamiliar in Korea.”
Since then she has been holding annual exhibitions in the Galleria department store.
Ms. Kim’s quest to master the art of chocolate began at a young age.
“When I was a young girl I had this chocolate, Nimege, from Orion Confectionary as an everyday snack,” she said. “That brand today is called, To You. It was the best. I also remember when relatives went on a trip abroad they would get me chocolate as a gift.”
The first encounter Ms. Kim had with the profession of chocolatier was when she was traveling in Europe. At the time she was studying in Japan after graduating from a college in Korea. “I was excited by the idea that I could make chocolate for a living because I love it so much.”
She went to parts of France and Belgium in search of the best chocolate stores.
“Although I enjoyed the tour through chocolate stores in Europe I found it a bit dull after a while because the chocolate designs and flavors at the stores were not very different from one another,” she said. “It was then I realized that by introducing distinctive Korean flavors and design I could build a good chocolate business. This decided my path for the future.
Chocolate has no absolute standard since much depends on the personal taste of the consumer. The chocolates that I make are 100 percent my own and unlike any brand or those made by other chocolate makers.”
Although she found her dream in Europe, it took time for her to turn the fantasy into reality
“In college I majored in social studies. After I got my master’s degree in Japan I began to teach Japanese at Korean companies.
“After marrying my husband I became a housewife. That’s when I got serious about studying chocolate because I wanted to return to work with my own speciality. At the time I was attending a private institute that taught students how to bake pastry. I wanted to continue learning about chocolate, but there were no institutes here that taught advanced chocolate techniques, so I decided to study aboard.”
At first she faced opposition at home, but she convinced her husband and in-laws through her sincerity.
“My family understood how hard I tried to find ways to learn chocolate skills in Korea,” Ms. Kim said.
Ms. Kim went on to attend Le Cordon Bleu culinary institute in London from 1999 until 2001, graduating with a chocolatier’s diploma. It wasn’t easy for her to be in a distant country trying to do something that no other Korean had done before.
“There were no Koreans in my chocolate-making class,” she said. “There were people from all over the world including the United States, India, Costa Rica, Mexico and Japan, but no Koreans.”
She found the hardest part of her studies was the difference in artistic knowledge between herself and her European classmates.
One thing she envied while studying abroad was the fact that European chefs, whether experts in bakery or chocolate, have been well trained in arts and culture from a very young age.
“I was artistically weak compared to my classmates, especially because the European students had majored in the arts at college.”
Ms. Kim distinguished herself by focusing on Korean culture. “No matter how talented the European chefs are, they don’t know Korean culture,” she said. “So I would use my own designs and patterns that were inspired by Korean culture.
After finishing school, Ms. Kim worked in the dessert department at the Ritz Hotel in London and on weekends she would travel to France to develop her skills with a French chocolate store owner who was a friend of a chef at the Ritz.
“In Europe, chocolatiers are taught through a mentoring system. The basics of baking and cooking are learned at school and then 90 percent of the other skills are learned in the field.”
Today she spends many hours making chocolates for customers, but she is also busy on behalf of her friends and family. 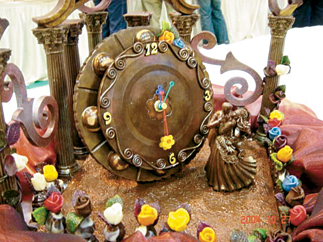 “My family doesn’t like any chocolate apart from mine,” said Ms. Kim. “However, my daughter, maybe because she is still young, enjoys chocolate cookies. She considers my chocolate too sour for her taste. My husband and other members of my family say the chocolates I make for them are the best. I also invite my daughter’s friends and their families during school breaks to my workshop where they can learn how to make chocolates. It is an annual event.”
Still, for a true artist, making art with chocolate seems a burden. She says some of her special pieces are just for display. “A lot of work goes into making chocolate art, and sometimes I feel overwhelmed by it, because I have such high standards. It has been making me depressed. But I believe this is just a process I have to overcome.”
Ms. Kim says some of her special projects anywhere from one week to an entire month to make, depending on the size and details. Some are later used as examples during her class where students can see them and try to come up with their own ideas for choco-sculptures. 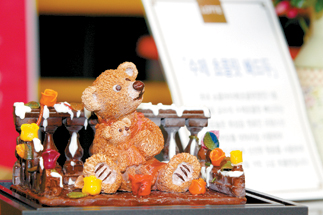 Ms. Kim still has many ambitions. “I’m hoping to open a nationwide chain of chocolate cafes that offer delicious small chocolates,” she said. “I am currently planning to open the first small chocolate themed cafe in the Lotte Department Store in Busan next month.”
On a bigger-scale, she is hoping that one day she can establish a chocolate museum.
“My family loves the idea of me doing something that no one has ever done,” she said. “Even today, I do not think it is my destiny to take the same path as others.
“The business of custom-made chocolate is relatively new to Korea and I believe the path I have taken breaks new ground, such as introducing the profession of chocolatier, holding an exhibition, opening an all-custom-made-chocolate store and starting a course in making chocolate at a university. I believe I am a very lucky person and I feel proud of what I have achieved.”
Ms. Kim offers some advice for Valentine’s Day shoppers. She said that really good chocolate is a product that can satisfy somebody with just one or two pieces.
“Eating a lot of chocolate is completely different from enjoying and loving chocolate,” Ms. Kim said. “Chocolate mania refers to a person who can appreciate a single chocolate and not somebody who consumes large quantities. Cavities are caused by bad eating habits and not by chocolate. Of course, excessive consumption of bad or fake chocolate does cause cavities.”