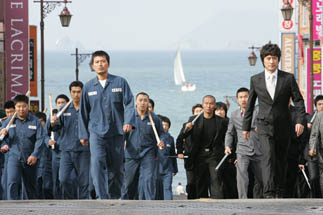 The film “Righteous Ties” begins with a poem by Robert Frost called “Frost Warning” in which he writes, “The rain to the wind said, ‘you push and I’ll pelt.’”
The quote, however, is ironic.
In the film, the rain pushes, but the wind fails to pelt, or vice versa.
“Righteous Ties” is a story of loyalty and betrayal, a subject that has repeatedly featured in Korean gangster melodramas. However, one naturally expects an unusual edge when the director is Jang Jin, whose trademark is dry humor and quirky characters.
In “Welcome to Dongmakgol,” an anti-war film, he wrote a screenplay that was set during the Korean War. He turned serious ideological issues into a joke by having popcorn fly through the air after bombs were accidentally dropped on a food storage depot stacked with corn. In “Someone Special,” a timid thief who invades a baseball player’s house departs as an apologetic friend, promising to live an honorable life in the future.
Jang’s unstinting and incisive humor, which often turns impossible scenarios into reality through an accident or a twist of fate, has always been his strength.
His latest film, however, is a bit of a departure. It weaves the story of two gangsters, one who betrays his friends and one who remains loyal.
Chi-sung (played by Jeong Jae-young) has been sent to prison for seven years for stabbing a man on orders from his boss, to whom he stays loyal, telling the court that his act was voluntary. His boss, however, betrays him to curry favor with the man who was stabbed ― he owns a factory that makes gum and jellies containing narcotics. The factory owner wants to see Chi-sung killed. The boss orders Chi-sung’s best friend in the prison to stab him in the shower room. Chi-sung avoids death, and when he recovers from his wounds he tries to escape. The plan fails, but the prison walls are accidentally torn down.
Jang’s humor, which sometimes transcends logic, is still here in this film. For example, air force jets crash when another gangster, Ju-jung (Jeong Jun-ho), accidentally pulls the wrong trigger during target practice ― and the vibrations from the jet crash cause the prison walls to crumble.
There is also Jang’s trademark humanism, displayed here in the banal jokes shared by a serial killer and a political prisoner at night after Chi-sung has been put in a cell between the two friends and acts as a messenger for them.
Yet it’s evident that the director has tried a new direction in this latest film. He sticks to the conventional formula of a genre film with less sarcasm, fewer twists and fewer experiments overall.
There are also more grand gestures in this film than in Jang’s previous work. The exaggerated humor of his earlier films has been toned down to become more subtle and more ambitious.
As a result there is an awkward mixture of serious action and comic drama that some might find an unsettling combination. But others will still enjoy Jang’s way of making a genre film crackle with subversive humor.