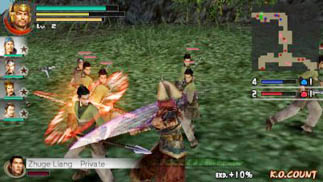 Dynasty Warriors from KOEI is more than a classic. With numerous titles, the game is closer to a legend.
The strong point of the series, which is set during China’s Three Kingdoms era, is the access one gets to all the ancient Asian heroes one grew up reading about in books.
Gamers can relive or reinvent history with the characters through the famous battles of the time. The Playstation Portable “Dynasty Warriors Second Evolution,” offers the excitement and the heroes that gamers had enjoyed in its predecessors.
One problem is that in this format, it has lost some of the simplicity that had been a vital yet distinctive aspect of game. It was this stress-relieving simplicity that drew so many gamers to the series.
Players can kill large numbers of foot soldiers with a single stroke. As the number of dead enemies increases so does the excitement.
“Second Evolution,” in putting the stress on strategy, has introduced a new map that looks more like a checker-board. The old version had something that was much more like a route map.
Now players have to clear “areas” within each stage, whereas the previous series had a map that contained information such as the locations of the enemy, allies and foot soldiers. The previous game allowed players to move freely around the map, without clearing sections. If a player wanted to move in for an immediate kill on a general he could travel to the area by foot or by horse.
“Second Evolution” requires one to complete the tasks in one area before moving to the next. The areas limit the movements of the player.
Riding horses in this version is meaningless because players must get a new horse in each new area. Acquiring “musou rage,” the game’s special power source, increases the killing power of a player and allows him to have more weapons and skills. This is a different from previous Dynasty Warriors.
When the life force of a player was reduced in previous games the player had to look for vases that may or may not contain meat and that helped recover some life.
Sometimes musou rage is found in these vases. This feature has been stripped out in “Second Evolution.” Part of the fun in the predecessor was searching for such vases. Taking out this feature is like taking the strawberries out of a strawberry tart.
The game does follow the general plotline of its predecessor. But, in truth, “Dynasty Warrior’s Second Evolution” has moved a step backwards.