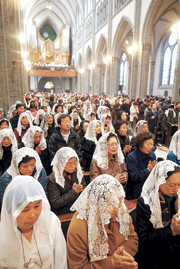 A housewife in Ilsan identified as “Kim,” 43, was recently baptized as a Roman Catholic. When her father- in-law passed away early last year, she was deeply moved by the support the church provided.
“Our mother-in-law, who is a Roman Catholic, called up the church’s aides at 3 a.m. and asked for help,” she says. “An hour later they picked up my father in-law from the hospital and moved him to the church mortuary. They literally did everything for him from beginning to end.”
Ms. Kim was moved when members of the church spent the next two nights at the mortuary in prayer. No extra fee was charged, she says, aside from the cost of materials, and the ceremonies were all conducted in Korean.
Later, Ms. Kim’s entire family converted. After six months of Bible study, Ms. Kim was baptized.
“One of the youngest women in the group shrouded my father in-law for burial like he was a member of her own family,” she says. “I was shocked when she cleansed his body thoroughly with her own hands.”
Korea has some distinct religious characteristics. A 2005 survey by the National Statistical Office showed that around 53 percent of the population is religious. The rest practice no religion. That’s an interesting number, given the enormous number of Roman Catholics in Europe and South America, Protestants in the United States and Muslims in Asia and the Middle East.
However, the religious environment in Korea is unusual. There is no dominant religion. Another factor is that Korea is one of the few nations where different religions coexist peacefully with little political conflict. 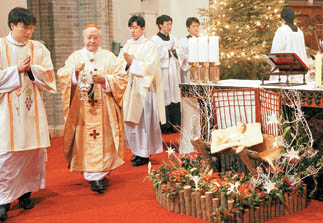 Roman Catholic churches and Buddhist temples have made gestures of friendship towards each other in recent years. Congratulatory banners are hung in temples across Seoul at Easter and Christmas, and Roman Catholic cardinals attend Buddhist celebrations. The conciliatory gestures shown by the church have helped its growth.
A revealing figure appeared in a recent census by the government. It showed that there are now 5.1 million Roman Catholics in Korea, an increase of 74.4 percent over the last 10 years. That’s in sharp contrast to the 3.9 per cent increase in Buddhists, to 11 million, and the 1.6 per cent decline in Protestants to 8.6 million.
In the past 20 years the number of Roman Catholics has increased by 175.9 percent, Buddhists by 33.1 percent and Protestants by 32.3 percent. The phenomenon has been called the resurrection of Korean Roman Catholicism.
The survey results have caused shock among religious communities in Korea. For the past few decades the missionary efforts of the Roman Catholic Church were a focus of criticism, not praise, because they were regarded as too passive compared to Protestant churches.
Critics say that the increase in Roman Catholics suggests that many Koreans view the Roman Catholic church as a good brand and are prepared to claim Roman Catholicism as their religion for the sake of social cachet.
“After the government’s survey was announced, the Roman Catholic Bishops Conference of Korea conducted research among registered followers,” says Bae Young-ho, the group’s secretary. “We found there were actually fewer than 4.7 million Roman Catholics, about 480,000 less than the government’s survey. It’s likely that people who hadn’t even registered their names at the church told the survey that they were Roman Catholics.” His analysis is simple ― the government’s figure is a distortion.
“If you think of why they gave their answers, it’s very likely that they are emotionally drawn to the religious image of the Roman Catholic Church even when they are not Roman Catholics,” he says. “You could safely interpret that as a sign that Koreans have a favorable image of Roman Catholicism.”

Others point to the history of the Roman Catholic Church in Korea, which naturally grew within local communities, and was able to approach followers more easily by embracing local traditions even while it stressed Biblical teachings. Roman Catholicism is one of the few religions in Korea that began without assistance from foreign missionaries. Roman Catholicism initially spread via Koreans who went to Beijing in the late 16th century to be baptized. Another factor was the installation of a second Korean cardinal by the Vatican.
Roman Catholicism had its hard times. When it was first introduced to Korea during the 17th century it was considered to be a form of Western learning, and the church suffered severe persecution. Its religious ideals were seen as a revolt against Confucianism, which puts its emphasis on the worship of ancestors. Any contact with Roman Catholics was regarded as a criminal act. An estimated 10,000 Roman Catholics died through persecution during this period, of whom 103 were later designated as martyrs by the Vatican.
The church finally obtained formal permission to operate in 1882 when, during the Joseon dynasty, Korea signed a friendship treaty with the United States.
But then Roman Catholicism faced another barrier, namely the strong influence of the Protestant church. When Christian missionaries settled on the peninsula in 1885, the Protestants quickly attracted a large following among working and middle-class Koreans by providing education and medical services. They also stressed human equality, an idea that later became a major source of inspiration for Korea’s independence movement during Japan’s colonial rule.
Following the liberation of Korea and the Korean war, the Protestant population in Korea exploded, fueled by an anti-communist ideology promoted by American missionaries. By 1995 the Protestant church had 10 million members and one in four Koreans were said to be followers.
The resurrection of the Roman Catholic Church in Korea since the ‘90s means it has begun to emerge from a long period in the shadows.
Oh Gyeong-hwan, an honorary professor at Incheon Roman Catholic University, explains that the biggest strength of the Roman Catholic Church in Korea is its spirituality.
“That’s not to say the Roman Catholics are more spiritual than other religions,” he says. “It’s just that Roman Catholics have a better chance of appearing more spiritual to the eyes of outsiders, because Korean Roman Catholic priests have shown integrity and their lives have been free from corruption. The church regards poverty as vital for priests and nuns. Their spiritual training is all about stressing that lifestyle.” 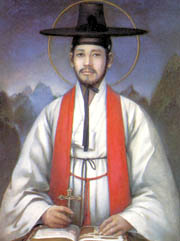 Kim Dae-gun, the first Korean priest, who was designated as a martyr by Pope John Paul II in 1984

Roman Catholic priests in Korea are prohibited from possessing any property. The parish takes strict measures if problems occur. Priests are not allowed to be involved in any matter regarding the church member’s offerings.
Mr. Oh also points to the church’s active participation in the nation’s democratic movement, adding that, for the past few decades, Myeongdong Cathedral in Seoul has stood as a symbol of social consciousness.
“Since the 1960s, when the Roman Catholic labor movement began among college students, the Church has always been at the forefront during times of political and social upheaval, especially when human rights issues were involved,” he said. “The justice and spirituality shown by the Church helped to build the Church’s image.’
More importantly, though, he speculates that the Roman Catholic Church in Korea succeeded in approaching the public by respecting local traditions and customs.
For example, in 1958 the Vatican gave the Roman Catholic church in Korea special permission to allow the practice of ancestral worship as a way of paying respect to elders. 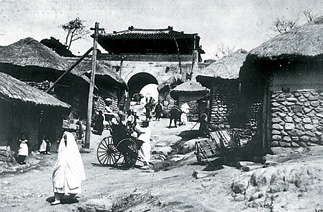 A scene at Seosomun, where Roman Catholic followers were executed during the Sinyu Persecution, when an estimated 10,000 Roman Catholics were killed by the government. [JoongAng Ilbo]

Jeong Jae-young, a religious socialist, recently offered a compelling analysis of the strength of today’s Roman Catholic church.
“People no longer seek out religion with the same determination as they did when there was religious persecution,” he says. “These days you don’t have to risk your life when you choose a religion. People simply want some spiritual comfort and satisfaction in their lives. They ‘consume’ religion. In doing so, they aim for a luxury or designer religion, one that looks like it is the most religious of all religions. People see Roman Catholicism as a religion that pursues tradition and ritual.”

He points to aesthetic advantages of the Roman Catholic Church ― the costumes worn by the nuns and priests, the solemn atmosphere of the cathedral, the mass and Roman Catholic traditions, which all help to package its image.
On the other hand, he explains, the Roman Catholic Church does a great deal to help people in practical ways.
“In a way Roman Catholics possess the image of being the luxury brand of religious observance, that’s their trademark. But they also stress voluntary works and charity when it comes to offerings and missionary activity,” he says. “Priests don’t put a burden on their followers while they have a generous attitude towards other religions. So their religious essence fits very well with the idea of a modern spirituality that is trying to offer spiritual satisfaction and achieved certain social goals.”