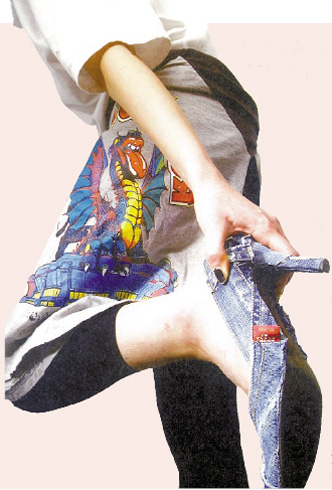 Renovation, whether in clothing or interior design, has been the trend of late. As the trend has become more and more commercialized, renovating sometimes costs more than purchasing a new item. For example, renovating a mother’s old velvet dress can cost up to 200,000 won.
“Trendy Reform,” a book written by U.B.Eco, a crafts group making use of recyclable goods, introduces various ways in which a simple idea can turn worn-out items into brand new products. The group’s initial concept is that “a simple idea can recycle numerous unwanted goods.” Its seven members ― Ahn Jeong-hye, Kwon Min-yeong, Oh Yun-cheol, Hwang Hye-yeong, Kim Dong-hwan, Yun Jin-seon, and Chae Soo-kyeong ― founded U.B.Eco in 2005. Here, the JoogAng Ilbo gets tips on how to make renovated items from everyday material.

Climbing Ropes & Cup Holders
For those who enjoy rock climbing, it’s always hard to know what to do with the used rope. The pricey equipment costs several hundred thousand won. However, it’s not much use once it starts to wear out. Such worn out ropes can be turned into new cup holders. Prepare 35 inches worth of worn out rope, a corkboard, and glue. Cut out the corkboard into a circular shape, and then attach the rope to the corkboard starting from the center. It’s also a good idea to pin the rope for a day in order to strengthen the attachment.

Jeans & High-heels
It’s always difficult to get rid of clothing items, even when they are no longer being used. Instead of stacking them in piles, try creating a brand new item by mixing jeans and high heels. Cut out pieces from an old pair of jeans and use glue to attach them to an old pair of shoes. This may get tricky, as cloth needs to be trimmed to fit the size and shape of the shoes. Leave them for a day and rub them with sandpaper to give a nice vintage look.

Old Books & Frames
Old books covered in dust can easily be turned into decorative frames. Take a book and soak it in water. Then, dip it in glue. Once the glue is absorbed take the book out and apply weak brewed coffee to the surface. When it’s dry, carve out two thirds of the book to make a screen for the new frame. Varnish it when it is completely dry. Add the finishing touch by decorating it with a few dried flowers. 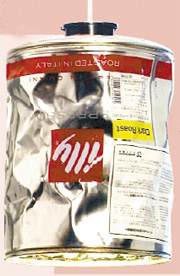 Scrap Paper & Notebooks
Scrap paper overloads office space. Make better use of this scrap paper by making notebooks. Take an A4-sized piece of scrap paper and fold it in half. Cut small triangular holes on the folded part of the paper. Thread the paper with glued cotton and tighten it. Use a piece of cloth to cover the threaded part, and then place synthetic leather on top of that. For the cover of the notebook use a piece of cardboard.

Turn a tin can into a lamp
What you need: A tin can, such as one used for coffee beans, tin scissors, a hammer, a nail and a bulb set (found in hardware stores, complete with a cord)

How to
1. Make a hole in the middle of the bottom of the can by putting the nail on the can and hitting it with the hammer
2. Put the scissors inside the hole and cut a circle
3. Roll the edges inward to avoid cuts
4. Hit the can all over with the hammer for an edgy design
5. Attach the bulb set inside the lamp and hang the lamp up