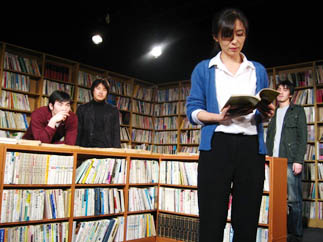 Four actors perform a play set in a bookstore in an actual bookstore. Provided by Dreamplay

It’s a heaven for both the bibliophile and the eristic. Surrounded by bookshelves holding 5,500 books, actors engage in serious discussions about Jean-Paul Sartre’s “L’Etre et le Neant” or “Being and Nothingness.” At other times, they argue over the controversial academic series, “Recognizing history both before and after Korean liberation.”
“Where Did Today’s Book Go?” is a performance that merges a play and a bookstore.
The “stage” is a real bookstore in Daehangno, the heart of the theater district in northern Seoul.
“It’s a perfect setting for the play because the play is about four college graduates who meet again in an old bookstore,” said Jeong Hyeong-ju, a promoter for Dreamplay, the theatrical company producing the play.
Until late last year, “Where Did Today’s Book Go?” was staged at a bigger (real) theater in Daehangno. At the time the play was nearing the end of its run, it won the financial support of the Seoul Foundation for Arts and Culture, which designated it a “leading public art work.” Then the Ieum Art bookstore, which specializes in social science books, offered to let the company continue its run in its spacious facility. The store’s owner believed the play would provide good entertainment for customers.
There is no stage nor special lighting in this bookstore. It is simply four actors speaking in front of you and bringing out the memories of how it was to be a member of the class of 1991 (and the smell of musty books).
There is Gwang-seok, who became a newspaper reporter; Jae-ha, who became an indie film director; Hyeon-sik, a graduate student; and Yu-jeong, the girl all three boys secretly admired in their college days when they were busy discussing political activism. It is in her bookstore, Today’s Book, that the four meet and relive their memories.
Old songs from late 80’s and early 90’s are played. The audience quickly falls into reminiscence as the characters discuss the poems of Gi Hyeong-do, the late popular, philosophical poet from that time.
After the show, the books mentioned in the play are sold for 1,000 won ($1).
mina@joongang.co.kr

“Where Did Today’s Book Go?” is staged every third Saturday afternoon at 4 p.m. and 7 p.m. at the Ieum Art bookstore located near exit 1 of Hyehwa station on subway line No. 4. Admission is free, based on a first-come first-served basis for the first 60 people. For more information, call (02) 6405-4566.