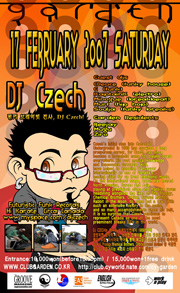 When I was a teenager in the late 90’s in Vancouver, newly-released from parental control and high on independence, D.J. Czech represented a new world to me ― a world of blazing breakbeats, glittering underground rooms, grinding bodies and strobing pupils.
Almost a decade later, on the opposite side of the Pacific Ocean, I will have a chance, along with other local breakbeat junkies, to revisit those days thanks to D.J. Czech’s upcoming arrival in Korea.
Were I able to speak to that younger self and tell him I would be living in Seoul in 10 years, he would very likely not believe me. D.J. Czech, on the other hand, would have little trouble accepting that within that span of time, he would evolve from a local hit into a headliner in the world electronic music scene catapulting both himself and the city of Vancouver into the international spotlight.
Beginning in the Vancouver underground in 1989, Czech was a hard-working staple of the breakbeat nights that rotated from club to club around the city, gradually building up a loyal group of followers. Once he built a reputation, he branched out to the nearby resort town of Whistler where he established “Soul Kitchen,” the longest-running club night in that city. “Soul Kitchen” continues to bring in big-name D.J.s from around the globe.
These days, Czech manages to do gigs around the world on the weekend, while maintaining residencies in two of Vancouver’s trendiest nightspots during the week. According to his Web site, every weekend for the past five years, Czech has been showing off his trademark turntable skills at massive raves and respected clubs around North America, Europe and Asia. He has headlined alongside The Prodigy, The Chemical Brothers, Crystal Method, Orbital and Porno for Pyros, to name a few. But he is always back in his beloved Vancouver during the week to keep his local scene thriving.
As his renown around the world has grown, Czech has turned to writing and producing for his own co-founded label, Futuristic Funk Records. The label, which spotlights many well-known and up-and-coming Canadian artists, is part of the reason that Vancouver has become so prominent as a Canadian mecca of electronic music.
On his first visit to Korea, a country increasingly featured on big-name artists’ world tours, Czech will be performing at Club Garden in Apgujeong on Saturday night and at Vinyl Underground in Busan on Sunday.