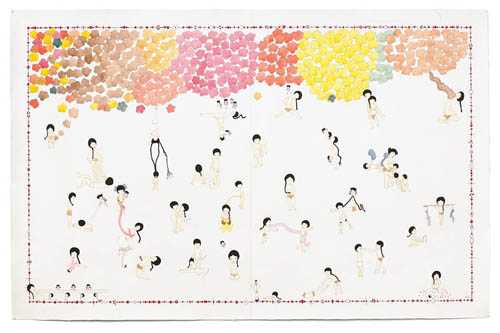 At first glance, the images stand out like pop icons, bringing to mind words like cute, sexy or bizarre. When examined more closely, however, there is something strangely distorted about each.
It’s partly the depiction of sexuality. Sexual characteristics have either been left out or exaggerated to the point that one can’t distinguish the gender of the characters being portrayed.
In “Obsession: Love Forever,” Hye-rim Lee, who is based in New Zealand, presents animated videos of perfume bottles, each of which contains a female body part. The images work together to create seductive images of female sexuality.
In her installation at Kukje Gallery, which is currently showing along with the work of three other artists, Ms. Lee questions fabricated ideals of female beauty using images that often exaggerate female sexuality.
She presents different body parts from a female bunny ― the elongated legs, the stretched eyebrows and blown-up lips ― on the glossy surfaces of round plastic plates that suggest one is seeing the bunny’s reflected images in a mirror. The name of the work is “Toki/Cyborg Project.” Toki, in Korean, means rabbit.
Other artists pose distortions in different ways.
Kyung Jeon, an artist from New York, features drawings of “cute” girlish characters, typically with long black hair and yellow skin, on mulberry paper. The pictures, however, pose disturbing portraits of female identity. When examined closely, each character is engaged in bizarre behavior, such as hiding a kitchen knife behind her back, strangling a companion using her hair or playing around with her umbilical cord. 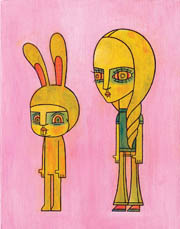 
The artist YP poses similar ideas for male adolescents who hide their masculinity behind childish tricks. Images by Hideaki Kawashima, on the other hand, feature bizarre images that embody complex human emotions.
Indeed, the characters portrayed by each artist suggest disharmony and are heavily influenced by pop culture, whether it is advertisements portraying female sexuality similar to Ms. Lee’s depictions or images similar in appearance to Mr. Kawashima’s female ghosts popping up in Japanese horror flicks like “Ring” or “Audition.”
The characters seem almost to be cultural trademarks.
The stories told by Kyung Jeon’s drawings, for example, are based on the artist’s confused identity as an Asian woman. YP exposes the dangers of youth culture through unbalanced body proportions and animated gestures that walk a fine line between pleasure and violence. Ms. Lee questions the impossible standard of beauty in today’s popular culture, while Mr. Kawashima brings attention to the bizzare characters from Japanese pop culture that are increasingly becoming a cultural stereotype in Western society.


The exhibit runs through March 4 at Kukje Gallery, Anguk subway station, line No. 3, exit 1. The gallery is a 20-minute walk from the station. For more information, call (02) 735-8449. The gallery is closed on Sundays.