Let me take you down to Nonsan

Let me take you down to Nonsan 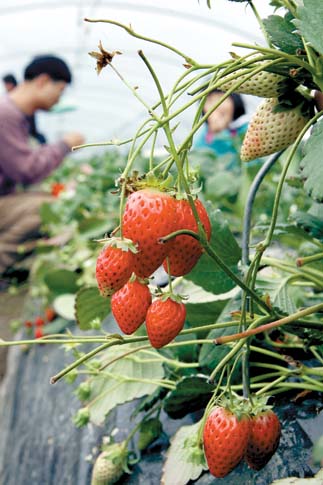 It takes five or six days for a mature strawberry to turn from green to red, and when it’s red it can be eaten. Most people think strawberries are sweetest when they are a deep red, but Seo Sang-seon, a farmer in Nonsan city, South Chungcheong province, said strawberries have their best taste “just before they turn completely red.”
Winter is the season for greenhouse strawberries. Strawberry seeds are scattered in September and the white strawberry flowers bloom in October. The harvest begins in November and continues until May.
Located west of Daejeon, Nonsan city is often associated with boot camp, but Nonsan is becoming better known as the biggest producer of strawberries in Korea, accounting for 15 percent of the nation’s total harvest. Most of the strawberry farms are located in the counties of Eunjin, Yangchon and Gwangseok. Nonsan also supplies other farm products such as jeotgal (pickled fish), kkotgam (dried persimmon) and daechu (jujube). Nonsan is a distribution center for jujubes and accounts for 40 percent of the jujubes sold in the country.
Nonsan is also blessed with many cultural relics such as Goryeo and Joseon dynasty Buddhist temples, a Baekje Kingdom fortress, Confucian shrines and schools from the Joseon dynasty. It also boasts scenic beauty. The magnificent views of rocky peaks and valleys, especially at Mount Daedun and in the Surak Valley, have won admiration from poets, calligraphers and painters. 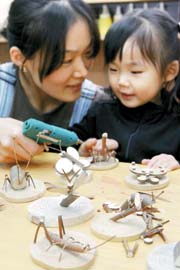 Most recently, however, visitors, especially from urban areas, go to Nonsan for strawberries and strawberry picking programs. Individuals, families with children and groups of tourists on organized tours can, for a fee, handpick strawberries and taste them on site.
Last Friday, a family with two children came to Mr. Seo, the owner of Sarang Ttalgi Nongwon (Love Strawberry Farm), for some picking. Strawberry-picking is only allowed during the weekend for large groups, because it takes five to six days for strawberries to mature, but Mr. Seo lets the visitors go to the greenhouse.
They paid 7,000 won ($7.20) each. The children seemed to be amazed with the sheer number of strawberries in the greenhouse. Thousands of bright red strawberries hang by their stems in furrow after furrow. They moved carefully so as not to step on the delicate fruit. No matter how much they ate, there seemed to be no end to the strawberries available. Soon the children had sweet smiles the color of strawberry jam. 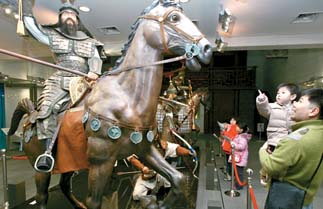 a family visiting the Baekje Military Museum. By Ahn Yoon-soo

Strawberries grown in Nonsan are of various types: seolhyang, maehyang, geumhyang, janghi (akihime) and yukbo (red pearl). The first three were developed in Nonsan while the latter two are from Japan. Janghi is the most commonly grown in Korea. However, seolhyang is the sweetest.
The strawberries can be eaten without being washed because they were grown without the use of pesticides. Natural predators are used instead to fight off insects such as mites that damage the strawberries. These predators are kept in plastic containers and are dispensed by hand. In three days, the predators hatch out and start eating mites.
These predator bugs are expensive and the city reimburses 80 percent of their cost to help farmers. The strawberries grown without using pesticides can be eaten raw and they also fetch a higher price on the market. About 150 farmers in Nonsan with 51 hectares of land use natural enemies to fight insects, according to Nonsan city.
The reason for the growth of strawberry picking programs is, however, far from sweet. It is designed to help farmers make up for a shortage of workers in farming areas.
“This is the reality of rural towns. There are just not enough people,” said Jo Young-sam, an employee with Nonsan city. “This also helps promote strawberries grown in Nonsan.”
“People in rural towns are aging. Nobody wants to stay in the countryside. Even 70-year-old seniors have to pick strawberries by themselves,” Mr. Jo said.
Mr. Jo added that the programs allow farmers to sell strawberries without packing them, which reduces costs still further.
Asked if the strawberry picking program is profitable for farmers, Mr. Seo said, “The visitors only eat half the amount they pay for because they become full very fast.”
The farmers let the visitors pick strawberries but do not allow them to pack them. However, some visitors hide strawberries in their pockets or in vinyl bags they smuggle in.
Mr. Seo and the other farmers sell at wholesale prices. A single box containing 2 kilograms (4.4 pounds) of strawberries costs between 15,000 won and 20,000 won, which is about 30 percent lower than the price in large cities. A jar of strawberry jam costs 5,000 won. For strawberry picking programs, call (041) 730-3385 or visit www.nonsangt.net.
After eating so many strawberries it is time to digest. Tourists can visit the Heasong Handicraft shop in Eunjin-myeon and try making wooden crafts or they can go to the Baekje Military Museum in Bujeok-myeon and learn the history of the Baekje Kingdom (18 B.C. to A.D. 660 ).

The Heasong Handicraft shop is a 5-minute drive from Sarang Ttalgi Nongwon. It sells lacquer-painted traditional tables, plates and vessels as well as nacre (mother of pearl) tables, cabinets and jewel boxes. Lamina of mother-of-pearl are already flattened and cut into various shapes so that visitors can pay their fee and try attaching them to objects that are almost finished.
Visitors can sandpaper a piece of wood, attach the lamina on a small wooden square and apply a transparent finish to make a cellular phone dangler for 7,000 won. Making a wooden pencil case costs 10,000 won, and finishing a wooden picture frame is 17,000 won. Here young visitors can also make different types of bugs out of wood for 5,000 won. For 150,000 won, they can finish a small nacre-decorated wooden table. Finished lacquer-painted or nacre-decorated crafts can also be purchased. For information, call (041) 741-9578 or visit www.heasong.co.kr.
Baekje Military Museum exhibits arms, porcelain, crafts, and bronze artifacts from the Baekje Kingdom and, with various displays, tries to explain its history, including its wars with Goguryeo and Silla, the two other kingdoms that existed during the Three Kingdoms period (early 4th century to mid 7th century).
The area around Nonsan was of great strategic importance for the Baekje Kingdom and the last battle between the Baekje and Silla, fought by Baekje’s General Gyebaek and Silla’s General Kim Yu-shin, took place in the nearby Hwangsanbeol area. In Nonsan there are still remnants of the Noseong fortress built by the Baekje Kingdom.
The museum opens between 9 a.m. and 6 p.m. except on Mondays and the Chuseok and Lunar New Year holidays. In warmer weather, visitors can practice archery from a mock fortress outside the museum.
Admission costs 500 won to 1,000 won. Call (041) 730-4538 or go to www.museum.nonsan.go.kr.
To get to Nonsan, take the Gyeongbu expressway and then take the Cheonan-Nonsan expressway. There are many trains and buses that go to Nonsan from Seoul.