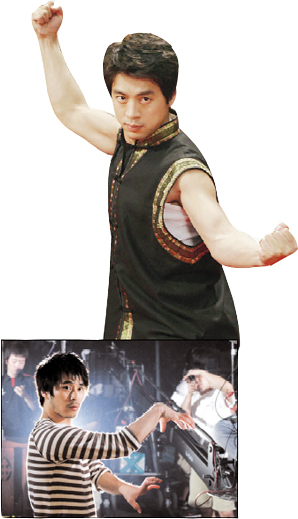 Kwon Oh-joong, at top, and his master Park Chan-dae, above.

Recent movies out in theaters probably left you dumbfounded for a couple of good reasons. You gaped at Kwon Oh-joong’s sleek kung fu moves. (Wasn’t he the chubby dude in that silly sit-com about a gynecologist’s family?) Your eyes opened wide when you found out Kim A-joong can sing. (She has a goddess-like figure and now she even sings?)
However stupefied, or scornful, you are, kudos to our celebrities who refuse to use understudies. But more kudos go out to the trainers who stayed behind the scenes coaching stars throughout the filming. Movieweek, a JoongAng film weekly, met with these hidden stars of recent films and the hidden-stars-to-be of blockbusters coming to theaters. 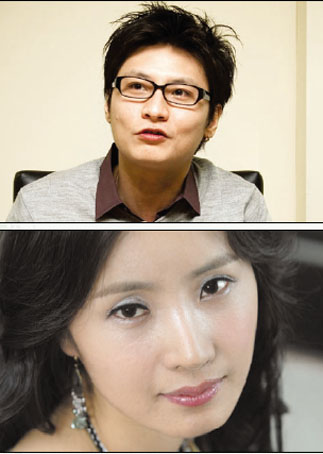 Kung fu master
Actor Kwon Oh-joong depended on Park Chan-dae, a kung fu master, for more than three months as he practiced his martial arts moves prior to the filming of the “Three Kims.”
For up to five hours a day, five days a week, Mr. Park stayed with Kwon, transforming him into the heroic kung fu coach who teams up with other martial arts leaders in a small provincial town to fight back the newest wave of gangbangers.
“Kwon already knew the basics of kung fu because he learned them when he was young, so I had a much easier time working with him than I would have with amateur understudies,” Mr. Park said.
Kwon was an enthusiastic student, Mr. Park said, carrying out his assigned training regimen faithfully. As a result, Kwon’s kung fu ability matches that of someone involved in the sport for five years.
As for Mr. Park, he started kung fu when he was 6. By the time he became a junior in high school, he was a national contender in Korea’s wushu tournaments. He is a six-time champion in world wushu tournaments and received the presidential sports award, along with a national sports medal. In March 2001, he declared his retirement from competition. He is currently the head of the Park Chan-dae Wushu Demonstration Team. 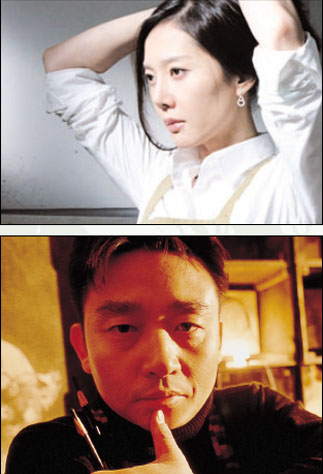 Sing like a rock star
Kim A-joong should be thankful that her director is a close friend with Lee Jae-hak, the bassist for the popular alternative rock band, Loveholic. Leaning on a friendship that dates back 16 years to their college days, Kim Yong-hwa, director of “200-pounds Beauty” persuaded the musician to teach Ms. Kim to sing like a true rocker.
Mr. Lee is said to have at first declined his friend’s offer because he had “never done film music” (though he was music director for the hit TV drama “My Lovely Sam-soon”). But the director was persistent. Mr. Lee took the job and ended up arranging Blondie’s “Maria,” which Ms. Kim sang in the movie and which became its unofficial theme song.
Singer Yumi also helped the actress learn to sing. She, too, was reluctant to participate until Mr. Lee, who became the “music director of the film,” persuaded her to hop on board.
“Kim A-joong had singing talent, so it wasn’t so hard to help her,” Yumi said. She said she was quite surprised to see Ms. Kim running off to the noraebang (singing room) during breaks to practice her singing. 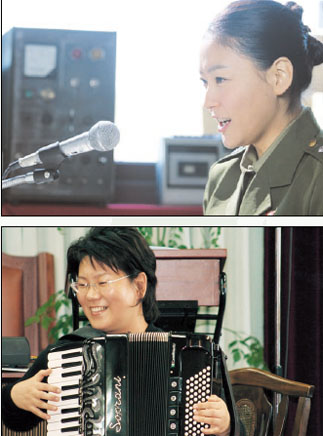 Top: actress Park Jin-hee. Above: Choi Su-rim, an accordion player from the North.

From the hands of Cho Duck-hyun
Actress Yeom Jeong-ah leaves a beautiful sketch of herself and her beloved family before she dies in “The Old Garden,” a film adaptation of Hwang Suk-young’s novel. An art teacher in the film, she completes numerous drawings of the old cottage in the green valley where she used to live and of the face of her activist lover, for whom she waits to be released from prison. The story is sad, but the artwork is breathtaking. It is all from the hands of Cho Duck-hyun.
Mr. Cho did not personally train Yeom. Instead the contemporary artist agreed to release many of his past sketches for the film. He also produced two originals, after reading Lim Sang-soo’s script, to be used as the pieces Yeom supposedly produces as the film reaches its climax.
“I came to adore Mr. Lim after watching his ‘A Good Lawyer’s Wife,’ and I was excited to hear that Mr. Lim was working on one of Hwang’s novels,” said the artist.
The chemistry between the two worked.
Mr. Lim said he saw Mr. Cho’s major series “A Memory of the 20th Century” from the late 1980s, which dealt with the artist’s difficult relationship to the European art tradition from the Renaissance period. He liked his drawings a lot and decided the heroine in his next film will be a character who draws like Cho Duck-hyun. 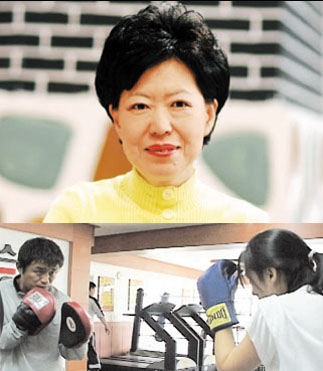 Speaking like a North Korean
Films dealing with North Korean refugees are on the increase and the provincial accents used are getting better. Actors are now distinguishing between the more nasal Yanbian accent and the blander Pyongyang accent, according to North Korean refugees who say the accents are “finally passable.”
Behind the actors who are speaking like actual North Koreans, there is Choi Su-rim, a refugee herself from Pyongyang in March 1999. She majored in the accordion at the elite Pyongyang Art College. Her first job in South Korea was as an actress who played accordion in a stage play, “Boy Check.” She said she was lucky to have a job related to her major. She became acquainted with actor Yoon Ju-sang, who introduced her to director Jang Jin. Mr. Jang thought of her when he started filming “Welcome to Dongmakgol,” a film set during the Korean War in the 1950’s. She became the North Korean tutor for the actors protraying the Communist Army.
So far, Ms. Choi has worked behind the scenes on four South Korean films. The most recent is a yet-to-be-released feature by director Kim Jong-jin, which takes place in a small town separated by the cease-fire line dividing the North and the South.
“That movie could be a story about my own life,” said Ms. Choi. “I cried a lot while reading the screenplay.”
In the movie, she helped actress Park Jin-hee, who plays a North Korean girl, to talk like a North Korean.

Food fit for a king
“Sikgaek,” or “Le Grand Chef,” is a film about food, and food will be the center of attention.
That was the explicit intention of director Jeon Yoon-soo, who adapted the story from a popular Korean comic book about an epicure who challenges himself to cook dishes from every cuisine in the world. He wanted the best food stylist to take part in his new film and he chose Kim Su-jin.
Ms. Kim is a well known food stylist who prepared the royal cuisine in the Korean blockbuster “The Royal Jester.” The “Sikgaek” crew called for her help and she accepted the offer.
“I was a fan of the cartoonist Heo Yeong-man, and I wanted to accept the challenge this work presented,” she said.
The movie deals with simple snacks of ramen and egg rolls and goes into more challenging recipes of swellfish and raw beef. It was Ms. Kim’s responsibility to buy all the right ingredients for the food, make the food look good and make sure the camera caught it from the right angle.
“Even if the dish appears only once in the film, I had to prepare at least three different versions of it to make it look its best,” she said.
Ms. Kim is also a cooking fanatic who says she learned how to make korokke, a Japanese deep-fried patty, when she was in middle school, and created her own recipe for kimchi as a young adult. She is currently the head of Food and Culture, an organization fostering food stylists.

True contender
Byun Jung-il is a Korean hero from the 1993 World Bantamweight Championship boxing match. A former boxer and a former boxing commentator for sports news, he trained many young champions including Kim Ju-hui, who won the world female junior flyweight boxing tournament. Mr. Byun’s entry to the film industry began last spring when the crew for “Miracle on First Street” asked him to be the personal coach for actress Ha Ji-won. The film is about Myeong-nan (played by Ha) whose dream is to become an Asian boxing champion. Her town is on the verge of being overrun by thugs behind an urban development plan. Mr. Byun had Kim Ju-hui in mind when he decided to train Ha.
“Boxing is a sport that requires a lot of energy. So an average person cannot go on practicing for more than two hours, but Ms. Ha did a good job being in the ring for more than three hours a day,” Mr. Byun said about the five months he spent with the actress to train her.
He said he was very strict with her, treating her as if she was one of his regular students. He did not allow her to make any mistakes on the day she filmed the film’s climax, the day of the tournament.
“I was the most proud of her when she succeeded in jumping the double unders [a jump rope move in which the jumper swings the rope under her feet twice in a single jump] when I was training her for physical stamina,” he said.