Animation classic hits the big screen after decades away

Animation classic hits the big screen after decades away 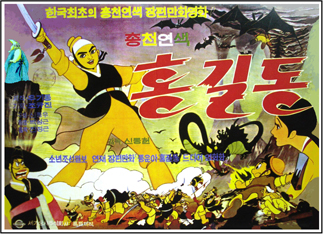 The poster promoting the film when it was released in theaters nationwide. [JoongAng Ilbo]

“Hong Gil-dong,” which was released in theaters in 1967, is the first Korean feature-length animation by Shin Dong-heon. It became a legend after the original film was lost. For the first time since the loss, part of the unedited version of the film, along with three minutes of a black and white trailer, which were owned by a visual art professor at Hongik University, Lee Nam-kuk, were introduced to the public for the first time. Mr. Lee came into possession of the film when he was working for the film’s producer in the 1970s. The film, which was restored by his students, were recently screened at the Seoul Animation Center.
“You are not supposed to reunite with your first love after you have parted ways,” said Shin Dong-heon, now 80. “Please keep in mind that the film was made 40 years ago.”
Mr. Shin’s animation is based on a series of cartoons that were produced by Shin Dong-woo, a late cartoonist and the director’s own brother, for the Youth Chosun Ilbo for four years starting in 1965.
Mr. Shin, the director, began working in the animation industry in 1957 after watching Disney’s “Peter Pan.”
Veteran animators and the film’s production crew, including Jeon Jeong-geun, 76, who was in charge of sound, attended the screening this month.
During the scene in which skeletons dance the Twist, the director said: “The Twist was very popular at the time. The audiences were thrilled with the scene.”
The production of “Hong Gil-dong” was a thorny path. The feature animation was done using film donated by the U.S. Navy. The drawings were erased with sodium hydroxide, and snow scenes were done using egg shells.
“We slept one or two hours on average for about 40 days before the film was released,” said Jo Min-cheol, who was on the staff at the time. “It’s unbelievable how we were able to do that.”
Mr. Shin agrees. 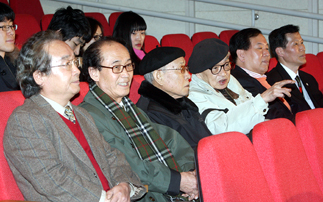 “We finished the final editing at 4 a.m the day the film opened in theaters,” he said. “We all crashed into bed. None of us saw the first screening on the opening day.”
It was an immense box office success. The line of people near Daehan Theater in Chungmuro, central Seoul, extended out to the gate of Dongguk University. The police were stationed nearby to prevent accidents. In nine days from its release, the film attracted 100,000 people.
Mr. Lee, who provided the restored film, is in the process of negotiating with a producer regarding copyright issues to screen the film on television. Meanwhile part of the restored clips from the film will be played on Saturday, 10 a.m. on KBS’s “Lost Memory ― Animation Hong Gil-dong.”