Diva passes 40, but she’s far from being finished

Diva passes 40, but she’s far from being finished 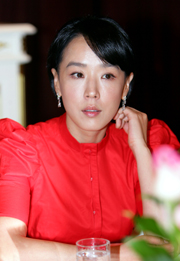 Kang Su-yeon during a press conference for ‘Munhee,’ her latest television drama, which begins Feb. 24 on MBC. [JoongAng Ilbo]

To many Koreans who went to school in the ’80s, Kang Su-yeon is the first name that comes to mind when the words “movie diva” are mentioned. She was an iconic deprived child and femme fatale for many film buffs long before Korean cinema entered the international spotlight at major film venues.
For those who want credentials, Kang won the Best Actress Award at the 44th Venice Film Festival with “Surrogate Mother” (Sibaji), a film by Im Kwon-taek, set during the Yi dynasty.
Kang began acting at the age of 4. Now, at 41, she is making a comeback as the lead actress for the television drama “Munhee.” It’s her first appearance since appearing in “Yeoin Cheonha,” a period drama about women rulers in Korean history, which ended in July 2002. Yet the veteran actress, who has been shooting with no more than five hours of sleep every day for the past few months, still said she’s “nervous” that the work wouldn’t be well received. The following is an interview with Kang.
It’s been a long time.
I’ve done a few movies including “Circle” (2003) and “Hanbando” (2006). I tend to sit back and wait once I am finished with one piece. I decided to take the offer for “Munhee” because it was written by Jeong Seong-hee, who wrote some of my favorite T.V. dramas such as “Kukhee” and “Seoul 1945.”

Do you still get stressed out about acting after all these years?
I even dream about myself complaining about my acting. It’s hard to completely free your mind from things like viewer ratings and box office hits, though I try to do so. It’s rightful in a way that actors, too, as professionals, get evaluations through figures. I can’t always shoot films that are box office hits. That’s how I try to handle the burden.

The news of suicides among young female celebrities shocks many Koreans.
It’s heartbreaking. [Lee] Eun-ju was an actress I cared for very much. I can’t figure out exactly what drove these actors to this state, but it’s a pity to see so many rumors and assumptions about their deaths. It’s just too much, even though they are celebrities. I’ve been in this industry over 30 years, but I still get hurt when someone says something that’s entirely irresponsible. I wish people would have some courtesy when they talk about actresses as if we were their “sisters and daughters.”

What kind of work is Munhee?
It’s a comedy, a traditional family drama, which is a rarity when period dramas are the trend. It talks about the life and the love of a woman who was born out of wedlock, living to obtain success and revenge by hiding the fact that she gave birth to a son when she was a teenager. It’s made in 50 episodes. Perhaps the strength of the drama is a team of fine actors like Lee Seung-yeon, Jeong Ung-in and Lee Jae-un. I’ve played a mother on a few occasions, but it’s the first time that I have had to show the serious essence of motherhood.

It’s your first drama since you passed 40.
It doesn’t feel that different. Whether I was young or now, I essentially stay the same in that I try to enhance my acting skills a step at a time. I do feel a difference in the expectations of a television audience. The ability to analyze the drama and decipher the acting has immensely improved even among the younger audiences in their teens and 20s, perhaps because they grew up surrounded by different media. Their criticisms seem to influence my acting as well.

What did you do while you were taking a rest?
I love traveling. I traveled here and there, including to France. I am so lazy I don’t really do much otherwise, though I enjoy eating. I eventually had to lose six kilos before shooting. In the morning, I read five different newspapers. It’s a habit from childhood. I don’t read newspapers to deliberately study anything, but I do think it’s important that I am aware of what’s going on in this society.

What are your plans for marriage?
(Laughs) I am curious too. I don’t intend to stay single, but I am curious as to when I will get married.