Film star back on stage for ‘The Pillowman’

Film star back on stage for ‘The Pillowman’ 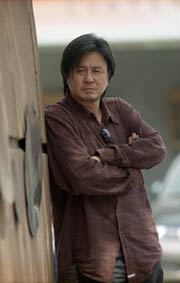 An unrepentant killer in “Lady Vengeance” and a revenge-seeking prisoner in “Oldboy,” actor Choi Min-sik will now be a fiction writer involved in one town’s gruesome child murders.
The work this premier actor chose to appear in this time is not for the big screen, however, but for the theater, where Choi made a name for himself early in his career. This is his first return to the stage in seven years.
Choi will play the leading role in “The Pillowman,” the winner of Britain’s prestigious Olivier Award in 2003 for the “Best New Play.”
“I was immediately attracted by the profundity of the work. It delved into the many-sided psychology of the human mind,” Choi said.
But a marketer from Musical Heaven, the company that will produce the play in Korea, said they almost lost the actor to a filmmaker.
“He had a blockbuster film coming up, but he changed his mind [to appear in the play first] just a week after he read the script for ‘The Pillowman,’” the marketer said.
Written by Martin McDonagh, “The Pillowman” is about a fiction writer named Katurian who gets investigated for grisly child murders in the town where he lives.
The story unfolds as a set of stories within a story as bizarre incidents begin to occur after Katurian describes them in his fiction. Katurian denies the allegations against him, but investigations uncover the secrets the author and his brother hold.
For the Korean version of the play, which will be staged here for the first time, Park Keun-hyung is taking the director’s seat. Mr. Park is currently one of the most renowned directors in Daehangno, a major theater district in Seoul, winning nine awards last year for his play, “Kyunsugi, Kyunsugi’s Father.”
Choi said Mr. Park was another factor in his decision to do the play.
“I trust the director, who is a realistic yet sensitive man who expresses Korean sentiment well through art,” the actor said.
The director was also excited to work with the Choi.
“Choi has the star power to generate interest in the play,” Mr. Park said. “The character he will be playing will be a fragile one on the outside but a cruel being deep inside. I believe Choi is the right person to play that character.” 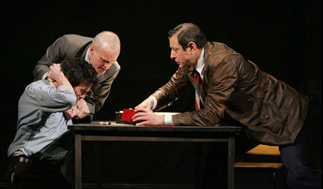 A scene from the original “The Pillowman.” Provided by LG Arts Center

“The Pillowman” had its premiere in London in 2003. The Broadway production in 2005 won the Tony awards for “Best Lighting of a Play” and “Best Scenic Design of a Play,” and it was nominated for “Best Play.”
The New York Times praised the play as being: “Appalingly funny, endlessly quotable. Delicious and wondrous, ‘The Pillow Man’ is above all about the thrilling narrative potential of theater itself.”
“The Pillowman” in Korea will be staged at the LG Arts Center in southern Seoul from May 1 to 20.