Fighters who had to beat themselves

Fighters who had to beat themselves 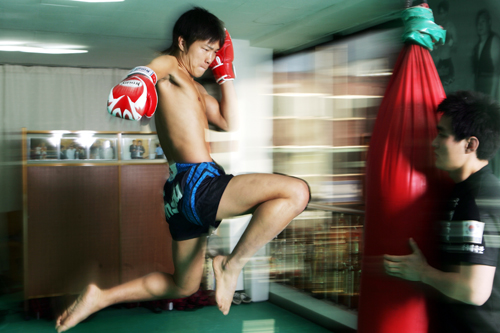 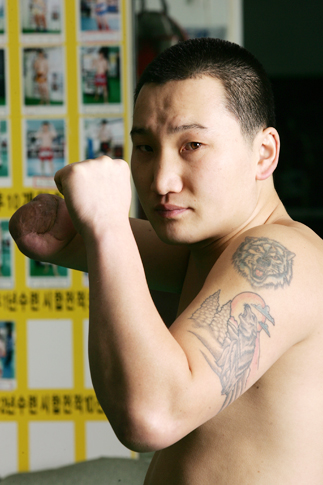 Kim Sun-gi posing at his gym.


The biggest change was that he had to work out and train more than others.
“While other fighters trained three hours a day on average I would double my workout and do six,” Mr. Kim said. He now has two tattoos of a wolf on his left arm.
“That’s the nickname the Thai fighters gave me,” he said with pride in his voice. In fact his sharp eyes looked like those of a wolf preparing to attack.
Mr. Kim is not fighting at present and spends most of his time on the sidelines. His last match was in 2003. He now spends his days training other young fighters at his gym, Seolbong, in Icheon, Gyeonggi province.
“I still miss the excitement and adrenaline of the fight,” Mr. Kim said while clinching his fist.
He still works out but not as much as he used to when he was still an active fighter in the ring.
Two of his most talented students are currently training hard with Mr. Kim. Both of them will be participating in the world championships that will take place in Thailand next month. Although he is semi-retired, Mr. Kim’s love of martial arts has remained as strong as ever.
“No matter what the situation is and what the odds are, a strong mental state is what makes a man into a winner,” Mr. Kim said.
Other than putting his fighters on the global map and promoting Muay Thai throughout Asia he said his other ambition is to raise a beautiful family, once he finds the woman who can make his life complete.
Mr. Choi already has a beautiful girlfriend. She has come to every one of his fights during the two years they have been dating.
However, marriage is not foremost in his mind.
“Right now I have only one thing in my sights and that is to win a title and become Korea’s number one Muay Thai fighter.
And then? “I will decide when I know I’m the best ,” he said.