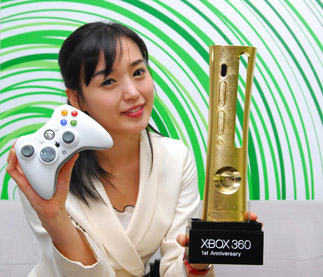 The spring season will see a host of gaming trophies on offer, such as this Xbox 360 prize. [JoongAng Ilbo]

Korea’s gaming scene is warming up along with the weather, and a number of interesting events have already taken place, with more scheduled for late February.
Last Saturday, the Air Force’s professional gaming team participated in the first e-sports competition officially hosted by the Korean Air Force.
The Air Force’s team played against StarCraft legend Lim Yo-hwan.
Unlike other offline professional gaming competitions where screaming girl fans wave placards and tens of thousands of spectators vigorously slapping on plastic noisemakers, this event was more in line with military conduct.
The venue was not a beach or a huge stadium, but an auditorium at the Cheongju base, where four players ― two on each team ― were placed on either side of the stage, watched by a solemn audience of soldiers in dark uniforms.
Lim Yo-hwan played with Sung Hak-seung, who used to be his teammate on SK Telecom’s T1 team. After the game, the crew held a fan signing session for elementary school students.
On a different note, “serious” was the last thing to be expected at other online games, such as the casual online racing game Kart Rider, which introduced a new pig-shaped go-cart last Thursday in a nod to the Lunar New Year.
This pig has supernatural powers and must be bought separately for an extra charge. A booster embedded in the pig cart allows it to be upgraded, giving it a stronger “pig-engine” that will last only until Saturday.
Most other online games, such as casual arcade games or shooting adventure games, also managed to somehow link the Lunar New Year into their events.
The most popular theme, which recurred in several different games, was hunting for golden pigs, since this year is the year of the golden pig, according to the lunar calendar.
The list of interesting events continues in the console scene at the end of the week.
Microsoft’s game console Xbox 360 is celebrating its first anniversary and will hold an “Xbox 360 Mania Party” on Saturday.
Video game players will meet up at Club Leno in Gangnam, southern Seoul, where they will play offline games inspired by Xbox games such as an O.X. survival quiz competition as well as real games of upcoming titles.
One lucky participant will receive a special glittering gold faceplate that can be fitted over the Xbox 360 console.