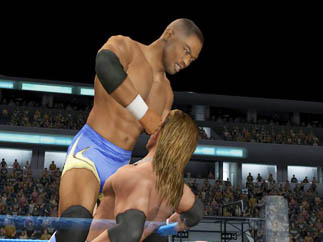 Despite the fact that many game developers have offered numerous sports games, there are a limited number of big sellers in this genre.
Other than soccer’s Winning Eleven and basketball’s NBA, wrestling games are one of the few types that have managed to get game players excited, and they will not find WWE SmackDown vs. Raw 2007 disappointing ― especially as they body slam the infamous wrestlers they have watched on television since they were kids.
The excitement is all there in the latest version of this game allowing different players to smack and jump on each other.
This is the strong point of wrestling games. Without friends inflicting pain and tumbling each other in the ring this wrestling game series would have disappeared into obscurity a long time ago.
The multiplayer feature is what makes the WWE SmackDown vs. Raw series stand out from other wrestling games such as Rumble Rose.
The biggest difference in the latest SmackDown vs. Raw, compared to the previous version, is that control has been shifted from the face buttons to the analog stick.
For those unaccustomed to the analog stick this may take some time to get used to. However, once accustomed to the analog stick, players will find that the change in control offers a greater variety of quicker and more responsive moves. Hence players have access to a larger arsenal than in the previous series.
Players are also allowed access to super moves such as powerslams via the R3 button of the controller.
Another added feature is the use of surrounding equipment like steel chairs, microphone cords, speakers and staircases. This feature really helps players to feel like they are participating in an actual wrestling match and raises the temperature of the contest.
But, in truth, gamers will find few other differences from the previous WWE SmackDown vs. Raw.
This is especially true of the graphics, which do not seem to have been improved at all and feel just the same as the previous series. This would make it difficult for a gamer to differentiate WWE SmackDown vs. Raw 2007 from WWE SmackDown vs. Raw 2006, or earlier versions.
Additionally, when a player is down, the time on the ground is so long the players are exposed to additional attacks from the opponents. This is definitely a problem that needs to be solved in the next version of the series.
In conclusion, getting WWE SmackDown vs. Raw 2007 is not a waste of money. But sooner or later the series will need big improvements if the manufacturer wants fans to stay interested.