[Talk of town]Yun and Yim tie the knot

[Talk of town]Yun and Yim tie the knot 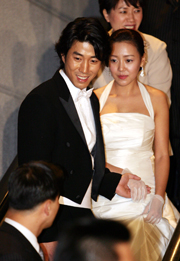 Yun Tae-young, an actor and the only son of the vice chairman of Samsung Electronics, married Yim Yu-jin, a fellow actor, on Valentine’s Day. More than 4,000 guests gathered at the Shilla Hotel’s Dynasty Hall to congratulate the newlyweds.
Among the guests were presidential candidates Lee Myung-bak and Sohn Hak-gyu, former Chief Justice Yun Young-chul, former Deputy Prime Minster Lee Hun-jae and former Information Minister Chin Dae-je. From the financial circle, the management from major conglomerate groups, including LG, SK and Shinsegae, showed up. Presidents and deans of top universities were also among the guests. From the entertainment circle, actors Bae Yong-joon, Ahn Sung-ki, Choi Min-soo, Park Sang-won, Kim Rae-won and Park Su-hong attended.
The parents of the bride and groom declined to accept any financial gratuity, a habitual token of congratulations, from the guests. The estimated amount of money the family spent only on the food served at the ceremony is over 100 million won ($107,000).
The couple met during the filming of a KBS TV drama in 2003. They appeared in the drama as siblings, but they said it was not until 2005 that their relationship became serious. Mr. Yun said he plans to continue his acting career while Ms. Yim said she will concentrate on being a loyal housewife instead.
Mr. Yun is 33, and Ms. Yim, 26. 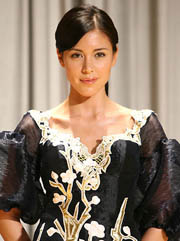 After 20 years, Mayes is back
Ursula Mayes, an American model and actress, came to visit Seoul with her Korean mother, Lee Mi-hee, last Sunday to join charity events for multiracial children in Korea.
It’s her first time in Korea since she left when she was 6. Her father was a German-Native American U.S. soldier stationed here in the 1970’s.
“I will do a lot of charity work while I am here for mixed-blood children,” the 26-year-old celebrity said on the first day of her five-day visit. “I feel so close to them because I understand the hardship.”
She will join hands with Pearl Buck International and appear on local television shows assisting bi-racial children in need. She also promised to donate part of her future earnings in Korea to charity organizations.
“My stepdad [who is also a mixed-race Korean] said although he can’t remember how to speak Korean, he still has a clear memory of Korean kids bullying him and throwing stones at him. It touched me a lot because I am also a mixed-blood person,” she said.