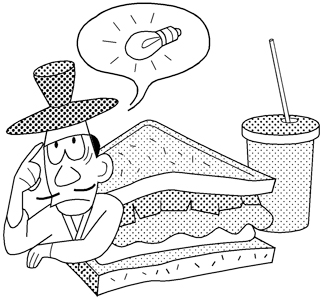 A scene from Vittorio De Sica’s “Bread, Love and Dreams” shows a haggard old man sitting on a placid country road eating bread. The county police captain asks the old man, “You’ve got something inside that sandwich, right?” Showing the officer the plain piece of bread, the old man responds, “Sir, only my dreams.”
Late journalist and writer Hong Seung-myeon’s collection of notes “Sandwich Made of Dreams” contains essays about various foods; Hong Seung-myeon selects the sandwich filled with dreams eaten by the old man as the “sandwich containing the taste of the common people.”
Sandwiches were originally snacks for people who did not have enough time to eat a formal meal. The sandwich, which is well known enough for the story of its origin to appear in the Encyclopaedia Britannica, has done its share to create the general image of fast food. John Montague, the fourth Earl of Sandwich, who served as England’s Cabinet minister during the latter part of the 18th century, refused to leave the gaming tables because he was on a winning streak and asked for some bread filled with meat and cheese.
Today, the sandwich is a universal food. America’s Subway Sandwiches has over 27,000 branches in 85 countries, rivaling McDonald’s. Increases in income and leisure time influenced the sandwich to become a healthier food. The British Sandwich Association brusquely announced it would exclude the hamburger -- a longtime partner in fast food -- from its industry.
The sandwich has found its place in our lives as well. Phrases like the “Sandwich Generation” or “Sandwich Syndrome” stir up images of flattened ham or cheese laid out on a piece of bread. People worry that the government’s slogan, “Dynamic Korea,” will transform into “Sandwich Korea,” as we are crunched between China and Japan.
What if one were to apply an entirely different concept of sandwich than previously used? Our fate as a sandwiched nation could be interpreted favorably instead of as a stifling condition.
The fast nature and bountiful contents of sandwiches are also characteristics epitomized by Koreans.
The contents contained between the slices of bread determine the charm of a sandwich. Like bibimbap (rice mixed with seasoned vegetables) and gimbap (rice and vegetables wrapped in seaweed), the sandwich’s strong point is its endless possibility to create hundreds of different tastes. More than anything, one must ponder what dreams to insert inside “Sandwich Korea.”