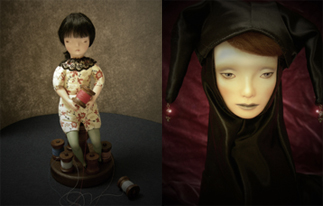 Dolls created by Lee Jung-ha and included in the exhibition ‘Dream Play.’ Provided by gallery Miccle

Through ornate bisque dolls, Lee Jung-ha reveals her distorted version of reality at gallery Miccle, Mapo district, northern Seoul. The exhibition, titled “Dream Play,” features 19 full-sized dolls and 10 miniatures, all hand-made by the artist.
The word “bisque,” which also means biscuit, refers to a piece of unglazed ceramic that has been fired twice, with color added before the second firing.
Bisque dolls, popularized in the 1850s and 1860s in Germany and France, differentiate themselves from other varieties of porcelain dolls in that they have a more realistic skin tone.
The dolls regained popularity in the 1980s when collectors began buying them. The dolls are usually hand-made and very fragile.
The dolls seem to go beyond the function of play for Ms. Lee, as she incorporates an aura of haunting reality.
“This is the play of my nights and dreams. It might be yours as well ― a dream you might have had long ago,” wrote Ms. Lee in her artist’s notes.
When looking at the dolls, it is as though her dreams are an eerie mix of innocence and mystery. The bisque dolls with cherubic faces have the proportions of a child, yet their sullen expressions suggest otherwise.
The dolls are dressed in intricately embroidered outfits and are set in introverted poses, such as having their arms folded discreetly in front of them.
Following the bisque tradition, Ms. Lee’s dolls are realistic, but her overall concept uses fictional imagery. For example, a doll with wild white hair in the shape of a cloud stands awkwardly while a gold crescent moon floats overhead.
The artist has molded traditional craftsmanship into modern art.
“Lee Jung-ha’s ‘Dream Play’ is refreshing in a way, because she incorporates traditional ceramic techniques to portray her own point of view of the world in the midst of our contemporary art scene, which stresses experimental fantasy,” said Yu Hui-won, the director of Miccle.
This is Ms. Lee’s second solo exhibition, following “Merry-go-round” at Gallery Dos last May, which also showcased dolls. After graduating from the Western art department at Chugye University for the Arts in 1997, she has been involved in numerous group exhibitions, including one in Ssamzie Space in 2003. She went to the United States last year and got a products teacher certificate from the Doll Artisan Guild (run by Seeleys) doll products program.
Her works so far have been mostly bisque dolls.