Sailing into the winds of change

Sailing into the winds of change 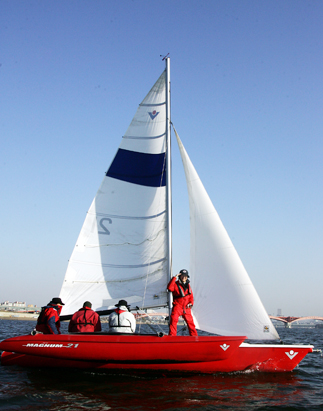 Harold Shim, right, aboard a 21-foot trimaran on the Han River in Seoul with members and guests of the 700 Yacht Club. By Kang Uk-hyun

In 1965, as an 11-year-old immigrant to the United States, Harold Shim found himself with his brother and sister living with an adoptive family on Wrangell Island in southeastern Alaska. His adoptive parents were teachers, who did a little fishing on the side, and Shim learned to fish and earn candy money by harvesting cheek meat from halibut heads at the local fish processing plant. Because he and his siblings were the only Koreans on the island and his adopted family spoke English, Shim’s native language became rusty with disuse, but that wouldn’t stop him from returning to work in Korea as an adult.
When he reached high school age, Shim began running track and cross-country. To get to track meets on other islands, he could take a plane, a fishing boat or a sailboat. The sailing trips, which sometimes lasted several hours, were the beginning of a love affair that would lie dormant through his early and mid adulthood.
Fast forward to the spring of 2000 in Maui, Hawaii. Mr. Shim and his wife enjoyed an evening sail on board the America II, an America’s Cup contender that competed in 1987 against Dennis Conner’s Stars and Stripes. As the sun set, and waves broke over the bow, a love for sailing re-awakened in Mr. Shim.
“I decided right then and there, when I go back to Korea, I’m going to sail,” he said.
The fruits of that determination float now near the shores of the Han River where it flows by Seoul’s World Cup park, about a kilometer from the World Cup soccer stadium ― eight sailboats ranging in length from a 9-foot dinghy to a 34-foot catamaran. Four 21-foot trimarans are used for racing.
This stretch of river, bordered by the Gayang and Banghwa bridges on the north and the Sungsan bridge on the south, is the widest and most consistently deep section of the Han, Mr. Shim said.
“This is where sailing will take off [in Seoul],” he said.

OUT ON THE WATER
In a city of more than 10 million, it’s hard to ever feel like you’ve completely left it all behind. Parks only muffle the sound of passing traffic and hikers share the trails with literally thousands of others.
Being out on the water in the Han River is a welcome exception. On a Sunday afternoon in February, the main sounds are the whistle of the wind from the north and the bow of the 35-foot sailboat pushing through the water.
Four members of the 700 Yacht Club sit aboard the Hunter 25, along with two guests, enjoying a winter’s sail. Even though the sun is shining and on-shore temperatures are fairly mild, it’s noticeably colder out on the water. The wind searches your clothing for any opening, finding its way in and chilling the skin underneath. After 10 minutes, my jaws begin to go numb and when I ask a question, my tongue moves like I’ve been eating ice cubes.
The boat leaves port under motor and heads toward the far bank. Mr. Shim, who founded the club in May 2006, is at the wheel and Sean Hayes, an American attorney working for the Korean Constitutional Court, readies the sails. The steady stream of two-foot waves coming from the north frequently break into white caps. Even without the sail there is enough wind for the boat to heel to the left, requiring the passengers to shift to the right for ballast.
Mr. Shim says it’s one of the windiest days of the year, but adverse weather is no deterrent for the members of this club. The final sail of 2006 took place in December when the temperature was 11 degrees below zero Centigrade. The first sail of 2007 came during the first week of January.
Five members of the club recently returned from a sailing trip to the Philippines and next fall, a trip is planned for Victoria, British Colombia, where Mr. Shim has a condominium.
A wind surfer wearing a wet suit streaks across the water in front of us. He reaches the far side of the river, and turns back. It takes him just over three minutes to get back to the World Cup Stadium side, a distance of just under a kilometer.
In the clubhouse, Mr. Shim is a friendly but busy person. He jumps around checking on boats, preparing for upcoming sails and checking on rental groups, but out on the water, his smile becomes less hurried and his conversation takes on a more genuine, interested air.
We sail for an hour with different club members taking turns at the wheel before heading back to the clubhouse for a rest.

A NETWORK IN THE MAKING
Mr. Hayes is one of five of the 700 Yacht Club’s foreign members, which includes two Korean Americans. Most are Korean businessmen who work for American companies. Their sailing ability when they join the club ranges from next to nothing to being comfortable on the water, but Mr. Hayes, who is also the club’s vice-commodore, said learning to sail is one benefit of membership.
“Their [new members’] first experience sailing is probably here, and the Han River is quite an easy place to learn to sail,” he said.
Mr. Hayes learned himself last May and along with another yacht club member, became one of the first foreigners to get a Korean yacht operator’s license, which is needed to sail a boat with a five-horsepower or larger engine attached. This applies to only three of the club’s boats, and any club member can sail them as long as someone with a yacht license is aboard.
The club, of which Mr. Shim is the principal shareholder, owns the boats, and members get the right to use them for 3.8 million won per year. Housed in a floating barge, the club leases space from one of the riverboat companies that offers cruises on the Han. Mr. Shim estimates that 200 members are needed before he covers the cost of buying and maintaining the boats, and leasing the space.
Nine months after founding the club, there are 25 members. Mr. Shim hopes to reach 100 members this year.
Inside the clubhouse are pool and foosball tables, sofas, a large-screen TV, a sound system and a kitchenette. Barbecue grills are stowed under a ramp leading down to the water and see frequent use on summer nights.
All but one of the members speaks English, Mr. Hayes said, and that is the language used at business meetings.
Mr. Shim chose the name 700 Yacht Club because he envisions having that many members spread across Korea someday.
“It’s possible in Korea because there are so few sailors,” Mr. Shim said. “I see that as an opportunity.”
For now, the members happily share eight sailboats, which they can use on a first-come-first-served basis. It’s possible to make reservations but until membership increases, there isn’t any need.
Marcus von Engel, an American financial consultant and the club’s commodore, said he enjoys sailing with his wife and two small children on the 25-foot Hunter sailboat.
On a summer’s evening, the children play for a couple of hours before falling asleep below deck, then he and his wife enjoy the sunset or the lights on the Gayang Bridge.
“When you go on a sunset sail underneath the bridges, it’s outstanding,” Mr. Von Engel said. “Now that they light up the bridges, the best view is from the water.”
Mr. von Engel said he also uses the club as a place to entertain business associates. It’s convenient to come sailing after work, have a barbecue and enjoy some down time with clients. He said he prefers it to golf, which if played regularly, costs more than a year’s membership.
Mr. Shim estimates there are around 160 cruising sailboats in all of Korea, 10 of which are in the Seoul area. A cruising sailboat is one that has a lavatory and bunks. Up to 10 communities around the country are also planning their own marinas, Mr. Shim said.
With Korea’s move to a five-day work week two years ago and rising levels of prosperity, sailing is ready to take off, Mr. Shim said.
“Once they see these foreigners and their Korean friends getting into yachting, the general population will catch on,” Mr. Shim said. “They’ll follow along.”
For more information about the 700 Yacht Club, visit www.700yachtclub.com.