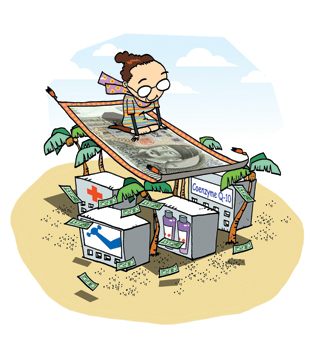 Lee Dong-hyeok, 33, immediately realized that a stylishly-dressed girl standing a few meters away was somebody he wanted to ask out.
He walked up and offered a casual greeting. However, when she turned around, he couldn’t help flinching. She wasn’t his age, as he had first thought. He had a hard time getting out of the situation without insulting what he now knew was an older lady.
Mr. Lee had just encountered a “Shangri-La,” a term coined to describe older Korean women who try to look young, dressing like their daughters.
“There are many mothers these days who shop for their clothes with their daughters,” said an employee at Lotte department store’s O’2nd, a fashion brand targeting those in their 20s. “We don’t have a clothes line for middle-aged women yet, but we are beginning to see them as major customers because they obviously like our brand. It makes them look younger and they are more likely than a young person to make a big purchase.”
The term Shangri-La comes from a fictional place described in the 1933 novel “Lost Horizon” by James Hilton. It is often used to signify a life-long quest for perfection, happiness and eternal youth.
“2010 Korea Trend,” a recent publication from LG’s Economic Research Institute, said that the so-called Shangri-La syndrome has become prevalent in Korea among women aged between 40 and 50. These women, as ordinary housewives, were reluctant to spend money on themselves in the past. The fact that they are now opening their purses means exciting news for some industries.
The report said that the Shangri-La syndrome has been changing the fashion and cosmetic industries, shifting their focus towards anti-aging products for older women, while also boosting the country’s medical and biotechnology industry.
While these industries have been developing elsewhere for a long time, anti-aging technology is just becoming a burgeoning field in Korea.
“It’s not simply about how you cover up your wrinkles,” said Ko Eun-ji, a researcher from the LG Economic Research Institute. “This means that the day we longed for will arrive sooner, the day when we can delay aging and bring our youth back.”
Shin Ye-shik, head doctor at the Lee Ji-ham Plastic Surgery Clinic in Gangnam believes that the future prospects for the anti-aging industry are very promising. The continuous growth in the number of his patients looking for Botox and wrinkle fillers from Restylane to fat injections proves it.
“As Botox injections became common since early 2000, the stereotype that plastic surgery was limited to those in their 20s and 30s has disappeared,” Mr. Shin said.
“Over 60 percent of the patients who come for frequent Botox injections are over 40.”
Heo Young-in, who works in marketing for the BK Plastic Surgery Clinic, said there has been a 15 percent jump in the number of middle-aged female clients at the clinic, a trend that has followed the increase in the number of middle aged women who work.
“Anti-aging treatments are common in the United States,” said Ms. Heo. “In 10 years, medical experts believe anti-aging plastic surgery will be the most common procedure after double eyelid surgery.”
Of all the trends, the anti-oxidant and anti-aging nutrient market has shown notable growth.
“The pharmaceutical industry is generally doing badly these days but anti-aging products are an exception,” according to a Yuhan Corporation spokesman who said sales for his company’s new nutrient Wellid, containing Coenzyme Q-10, reached 1.5 billion won ($140 million) in the year it was launched.
He said the market for children’s vitamins is diminishing, but products that contain vitamin C and Coenzyme Q-10, known for their anti-aging effects, are showing continuous growth.
Daewoong Pharmaceutical was the first to release a Coenzyme Q-10 product in this country, quickly followed by Youngjin and Samjin pharmaceuticals. The substance is also being considered for use in food and cosmetics.
Last September, Korea Kolmar Co., a cosmetics company, made headlines as they announced they had become the first to invent a “perfect” anti-aging cosmetic kit. Their miracle cream, they said, contained all three substances required for a wrinkle-free face and was developed using nanotechnology. The 2006 sales for Korea Kolmar was 8 billion won, an 8.6 percent increase over the previous year.
According to an Amore Pacific survey, every women aged 40 or over who was questioned said they used night cream, while they were also interested in using eye cream and wrinkle-free products.
The LG Economic Research Institute says that women’s obsession with looking young has always led to marketing trends. In 1994, there was the “Missy” trend, a word to describe married women trying to look like an unmarried one. Later a similar trend was called the “Jum-arella,” a term that mixed the word ajumma (married auntie) with Cinderella.
“These trends are enhancing the chance of creating a new and advanced market,” Ms. Ko said. “By 2020, we believe most anti-aging technology will be easily accessible for commercial uses.”