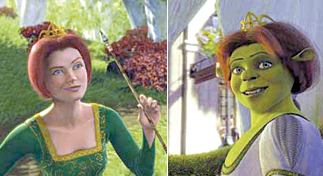 The two faces of Fiona ( or Piona, as she is envisaged by LG Ad).

Who would have thought that Shrek’s Princess Fiona would be the perfect model to promote feminine products to Korean women?
Well it’s about to happen soon. And she will be used to represent an older and more mellow group of Korean women as a symbol of success and beauty.
“The characteristics of Princess Fiona are perfect to use as a comparison with elder Korean women these days,” said Lee Sang-gil, senior account planner from LG Ad, the country’s second-largest advertisement group. Jumping on the anti-aging bandwagon, the advertisement group said they came up with some strategies to suit the tastes of their target audience, and the Fiona character was one of them.
“Princess Fiona is a two-sided character. Sometimes she is a female Shrek, unattractive but hard-headed, but at other times she turns into a beautiful, fragile woman,” said a report by LG Ad that studied nearly 4,000 housewives who had been married for more than 12 years and who had a household income in excess of 5 million won ($5,300) per month.
The report goes on to explain that most Korean housewives are very dedicated to their family ― so dedicated that they don’t have the time to make themselves look attractive.
“But these days they are turning their eyes toward how to make themselves look young and fashionable again when their husbands are at work and their children are at school,” it says.
The Fiona trend targets women aged between 38 and 42. They are very enthusiastic about working out at the gym, taking on sophisticated hobbies and willing to spend money if that will make them look “extra young and successful.”
“Our clients like the new Fiona term,” Mr. Lee said. “It is likely to be used in promoting cosmetics or well-being products targeting older women.”
In Korean the new term comes out as the “Piona” trend, which stands for “Personal Identity Obtained New Auntie.” In Korean, the pronunciation for “F” and “P” are the same.