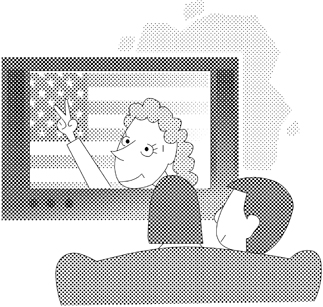 It would not be an exaggeration to say we are living in the golden age of American dramas. They are the most popular cultural products for young Koreans. Cable TV broadcasts at least 30 American dramas. They exude substantial cultural and social effects ― the doenjang nyea, or “bean paste woman” controversy originated from the sitcom “Sex and the City.”
Middle-aged people were enthusiastic fans of American dramas during the 1970s and 1980s, watching shows like “The Six Million Dollar Man,” “Wonder Woman,” “Little House on the Prairie” and “V.” “Friends” and “The X-Files” got the ball rolling in the 1990s, opening the door for current hits like “Lost,” “24,” “Desperate Housewives,” “CSI,” “Grey’s Anatomy” and “Prison Break.”
The wide variety of genres, elaborate story lines and exhorbitant budgets which formed the basis of these movie-like spectacles contribute to the popularity of these shows. Viewers commented that the TV shows “looked like movies.” American TV dramas use Hollywood production techniques. It is interesting that American dramas have made incredible advancement, reaching the living rooms of people around the world, while Hollywood suffers from a shortage of material. According to Time Magazine, the production cost of some series has increased 50 to 70 percent during the past three years.
It is interesting to look at the relationship between American film and TV dramas; after the golden age of classical movies, Hollywood lost many viewers to television and fought back with grand spectacle movies like “Ben-Hur” (1959). As television was able to match most spectacles, Hollywood responded with high-budget blockbuster movies filled with special effects, with “Jaws” (1975) being the first example.
Lately, the specialization of genres and the system of seasons are the strongest weapons of American TV dramas. The face of drama, the soap opera, which used to target housewives, has all but disappeared. Unlike movies that mix genres, TV dramas explore a particular genre. The season system allows endless repeats and the expansion of a popular program. The effects of movie sequels pale. If the ratings of a TV show are high, a show will continue for seven or eight seasons. Like CSI, which takes place in different cities, popular shows can spin off into different shows. Respected directors like Jerry Bruckheimer and Steven Spielberg are passionate about TV dramas. Will Hollywood search for Korean movies to remake? Time will tell. But the American drama, secure as a cultural theme, will be a force that moves Hollywood.