Deciding whether to laugh or cry

Deciding whether to laugh or cry 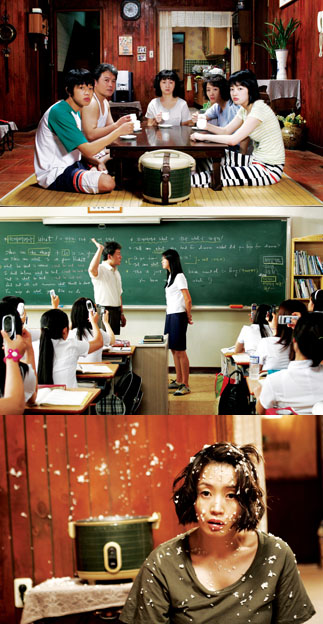 Top: The Shim family around the breakfast table, the only time they spend together. Middle: The English-teacher father stops mid-slap when his students all take out their camera phones to record him. Bottom: The sex icon Kim Hye-soo turns into a couch potato in ‘Shim’s Family.’ She becomes the aunt who blows up the rice cooker. Provided by CJ Ent

Ta-da-da-dum. They’re creepy and they’re kooky, mysterious and spooky. They’re all together hooky, they’re “Shim’s Family.”
This family does not descend from witches and ghouls, but the faces they make at each other at the breakfast table every morning are just as dreadful. After making a touching film about an autistic marathon runner, director Jeong Yoon-chul changed his artistic bent to present “Shim’s Family,” an utterly satirical profile of a bizarre Korean nuclear family.
The family members hate each other so much that the characters often cry out that they “embarrass the hell” out of each other ― although it’s hard to figure out who is actually embarrassing whom.
The tiresome father (played by Cheon Ho-jin) is a boring English teacher who goes to school each day for another pointless exercise in being laughed at. The cranky mother (Moon Hui-kyung) is sick and tired of being treated as a “mere maid” who serves meals to the family. Their weird high school-aged son (Yoo A-in) is deeply in love with a girl involved in wonjo gyoje, or “compensated dating,” where she dates older men for money. Their space-cadet daughter (Hwang Bo-ra) is only happy when she sneaks out of the library to go to the noraebang (singing room).
The children’s aunt (Kim Hye-soo) is a jobless couch potato who dreams of becoming an author of fantasy martial arts comic books. The only time the five meet is at the breakfast table, where no one talks. They only sneer at each other in disgust.
In the film, there is no unified plot. No one character cares about the others’ business, and each character has an independent story to tell: The son believes he has been a king in a previous incarnation; the mother falls in love with a young part-time noraebang employee; the daughter finds a new love interest in her extra-curricular teacher (Park Hae-il).
The film is not a drama or a comedy. It’s hard to decide whether you should laugh or cry when the mother falls flat on her face on the asphalt while trying to catch her runaway daughter.
One day, the family is forced into interaction when the father is framed (or so he claims) for wonjo gyoje himself with the girl his son loves.
Can the film be too bizarre for a successful public release? The director does not think so.
“I don’t think this movie is too hard to sympathize with,” said Mr. Jeong. He added that he only exaggerated each character’s personality. But he agreed that the film was indeed very different from “Marathon: Running Boy.”
“I would say ‘Marathon’ was like a recipe with plenty of fun and understanding, while this movie is like a recipe in which you can taste more of the raw ingredients. I did not add any artificial dressing for your tastebuds,” he said. “I left the delight of interpretation in the viewer’s hands rather than in the director’s.”