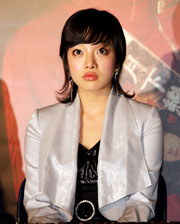 Jeong Yoon-chul and the cast from “Shim’s Family” met with reporters last week after the premiere at Yongsan CGV theater. Aside from Cheon Ho-jin, the veteran film actor, the rest of the cast is new to film. Moon Hui-kyung is a musical actress and Yoo A-in a sitcom actor. Hwang Bo-ra, 24, a new face in television ramen commercials, put on her best “space cadet” look for “Shim’s Family.” An interview with Hwang follows.

Q.How was it to be acting for the first time in a film?
A. I had great expectations for this film. I looked really fat, but that’s what I intended. I am on a diet again. Oh, and we had to put on mosquito repellent because we filmed in the summer near the Han River.
If I have the chance, I’d love to play a role in a melodrama next time, like a girl who falls madly in love with someone. I’d also like to act in an action film. Thank you.

What was it like to act with a big star like Park Hae-il in your first movie?
(Her eyes wide) I was always a great fan of his. The director did not tell me who would play the teacher character that I was supposed to fall in love with. When I found out that it was Park Hae-il, I was in a state of total excitement and nervousness.
I couldn’t talk to him. But he came up to me one day and stared hard at my face and the first words he said were, “You are one heck of a weird-looking girl.” I was so shocked.

There wasn’t much of a romance between you and Mr. Park.
Yeah. I am very sorry about that too (giggling). But he was a very nice person. I was hoping that we would have a scene that involved more than holding hands.
estyle@joongang.co.kr