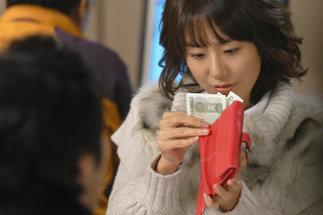 A scene from ‘Happy Women,’ which is all about anything but. [KBS-TV]

I summon the TV drama “Happy Women” to the court of TV absurdities on charges of ruining my family’s one placid evening during the Lunar New Year’s holiday. Sadly, there is no such court in existence, but if there were, I wouldn’t have wasted a moment filing a complaint with the Seoul Central Public Prosecutors’ Office against the directors of “Happy Women.”
Airing at 8 p.m. on weekends, “Happy Women” happened to be on last Saturday evening (the Lunar New Year’s holiday) when my family had just finished Act One of the holiday ritual ― having a feast and talking.
By the time we ran out of conversation topics after hours of feasting, it was time to turn on the television to find a politically correct show that family members of different ages and genders can all enjoy.
A weekend TV drama seemed to be a wise choice, and I quite liked the title, “Happy Women,” so I tuned into that drama, bringing about my family’s unhappiness that evening.
“Happy Women” is a story of a young, working housewife, Ji-yeon, whose dream is to buy a house in her and her husband’s name. Her house-buying obsession becomes so strong that she refuses her husband’s offer to go for a fancy dinner to make up for having an affair with another woman.
Instead, she proudly cooks a humble meal for her husband after he returns from, sorry to say it, cheating again. This gave my mother and me our first reason to explode.
“She should be collecting a giant alimony check instead of cooking for that bad boy,” I cried out.
“That girl is such a moron,” my mother chimed in.
Like mother, like daughter.
We exploded again after seeing another female character, Mi-ra. She is in love with a young detective, who does not love her in return. Still, she looks like the happiest woman on Earth when she does his house chores.
The detective takes her kindness for granted, and my mother and I started to curse him. My poor father could not say a thing to the angry women of his family.
This was not the end.
There was a single-female character who was desperate because she had no one to watch a DVD with.
She cries her eyes out while watching Renee Zellweger sing the unofficial anthem for singletons, “All by Myself” in the film “Bridget Jones’s Diary.”
The “All by Myself” segment is only at the film’s opening, but the character was bawling her head off already. I had to tell my father that I don’t think I am all by myself and that I never cried watching the film.
So the drama’s female characters boil down to having one thing in common. They are standing at the zenith of unhappiness. The drama’s directors said on their Web site that they want to look into the meaning of the many family structures that exist in modern society.
Do they believe that their mission statement has anything to do with a woman forgiving her husband’s cheating, a single woman crying watching a DVD by herself and a woman abusing herself for a love that is not returned?
This is simply beyond my power of understanding.
Come to think about it, maybe it was the program’s directors’ hidden strategy to get people like me to watch their show just so I could criticize it.
The directors are happy as long as viewer ratings are high, and I couldn’t tear myself away from the screen that evening because of the strange pleasure of getting angry at the absurdities of the drama.
One thing’s for sure though. I will never ever watch “Happy Women” again for the sake of my own happiness.