Treat these grandmas with respect

Treat these grandmas with respect 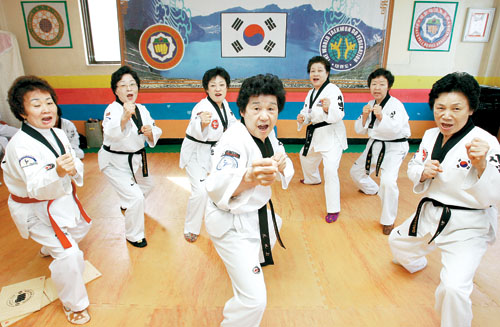 Members of the Korean Grandma Taekwondo Federation including Ji Bok-yeon, leader of the group (center), getting ready for battle at their gym in Buypeong, Gyeonggi province.

On a warm evening last week, 15 women were throwing sharp, firm punches at a small taekwondo gym in Bupyeong, Gyeonggi province. Their thunderous cries of “hah” echoed through the room. The scene would have been unremarkable, except that all the women were over 60, some were in their’70s and, until recently, when age caught up with them, the group had two women who were in their ’80s.
These tough ladies are members of the Korea Grandma Taekwondo Federation [sic]. According to Yoon Yeo-ho, 64, who is the team master and the only male presence in the room, the ladies’ punches may look lethal but they are actually used only during taekwondo demonstrations, presented at ceremonies and events in Korea and aboard.
“We go to any country that invites us,” said Mr. Yoon.
Since the Korea Grandma Taekwondo Federation was first established in 1989, the ladies have demonstrated their wood-smashing, high-kicking, solid-punching techniques in various countries including China, Taiwan and the Philippines. “We try to get out of the country once every year,” Mr. Yoon said. “We’re currently scheduled to appear at a festival in China in August.”
Mr. Yoon said that when the demonstration group first started there were 50 to 60 women. Over the years the number has fallen to around 30. “Some left because they were too old and some just passed away, which is always a heartbreaking moment,” he said. 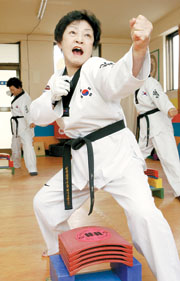 The team was the brainchild of Mr. Yoon, who was, at the time, teaching a variety of sports at government-run centers for the elderly in Incheon. “It seemed to me that taekwondo uniforms might look good on these ladies and it might benefit their health.”
Most of the students who have trained under Mr. Yoon were originally involved in other sports at the center. Many people wonder why Mr. Yoon’s group consists solely of women. He said the first reason is that most people who visit the centers for the elderly happen to be women.
In addition, old men never stay long after witnessing the performance of the ladies.
“There were several older gentlemen who showed an interest. But because women are dominant in this class the men tend to quit after a couple of days,” Mr. Yoon said. The taekwondo master is considering opening a class exclusively for older men, once the number of potential participants exceeds 10.
He said one of the many misunderstandings about taekwondo is that the Korean martial art is for little boys and girls, whereas it is a sport for all ages.
“As the nation where taekwondo was born, we should help people of all ages in this country to participate in learning taekwondo,” Mr. Yoon said.
For the taekwondo grandmas, their love of the martial arts goes beyond a simple hobby.
Ji Bok-yeon is one of the oldest members, having recently celebrated her 75th birthday. She said she has already had a photograph taken in her taekwondo uniform that will be displayed at her funeral. Mr. Yoon said it has already been agreed among the students in his class that, when Ms. Ji passes away, they will attend her funeral wearing their taekwondo uniforms. “I have never regretted taking up taekwondo,” Ms. Ji said. “It helped me recover from rectal cancer. I used to take 30 different anti-cancer medicines a day, but after 10 years of working out I am stronger than ever.”
“Bring me any young punks. I could put them flat on their backs with my punch and my elbow attacks. First I would punch them in their nether regions. You know that is the weakness of every man, young and old,” Ms. Ji claimed as her eyes narrowed and she smiled.
Ms. Ji was undoubtedly one of the best in class. She is a third dan. A dan is a rank among black belts. The higher the number, the more skilled the person. On the day I visited, among the 15 women only six were still red belts, which is the level below black.
“All these women have won their black belts through an official test at the Kukkiwon, the World Taekwondo Headquarters,” Mr. Yoon said.
While most elderly women might have to fend off an attacker with a wooden cane, Ms. Ji would simply break their bones with a single taekwondo chop. In the past she has smashed stacks of 13 wooden boards. 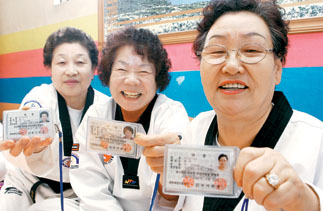 “Nowadays I rarely smash those wooden boards because I’m not as strong as I used to be,” she said. “At our taekwondo demonstrations I have passed the board smashing performances to the younger participants. But still, when the opportunity arises, I would not hesitate to crack some boards.”
The ladies start their day at the taekwondo gym at 10 a.m. They practice taekwondo chops and kicks for two hours. The ladies start the class by shouting greetings in Korean, Japanese, Chinese, English, Thai and Indian. Mr. Yoon said this is so that when the ladies go abroad to perform they will leave a good impression on their foreign hosts. Next they do some light stretching and deep breathing using their abdominal muscles. Before punching and kicking the ladies meditate to the sound of a tape with a soothing, calm voice that says, “Ask yourself if you have said the right things today. Ask yourself if you have said the wrong things.”
Immediately after the tape they let out thunderous cries and begin to kick, twirl and smash rubber boards for several hours. During a break, the women gather around and chit chat like any other ladies, while eating snacks such as bread and fruit that they take turns to bring to the gym.
They do this five days a week, every week. “Sometimes Mr. Yoon will take us to nearby Ganghwa Island and make us roll and jump in the sand,” said Cho Jeong-jae, who is the same age as Ms. Ji. “The training he puts us through is unbelievable, but this hardship has never stopped us from learning taekwondo.”
Yoon Kyeong-sook, 59, who is the latest rookie to join the taekwondo group, is the youngest among the ladies. She said she learned about the fighting grandmas while watching television. She has been training with them now for two weeks.
“Recently I had a stroke and my mouth and face were deformed. I wanted to get healthy again so I took up the class,” she said. “I live the furthest away but I wake up at half past 8 every morning to come to class.”
For others, the beneficial effects have gone beyond getting in shape.
Park Yeon-ja, 72, a second dan, said her love life with her husband has improved ever since she took up taekwondo. “I used to weigh 80 kilograms. Now I only weigh 67 kilos and there is more love coming from my husband, who encourages me to keep on coming to class every day.”
Ms. Park said her knees have improved because of taekwondo. In the past she had trouble walking up the stairs in the subway station; now she tells people to get out of her way.

One of the women in her 70s said that when she first came to the class her daughter had to help her walk up the stairs to the gym. “I suffered from serious diabetes,” the woman claimed. “Now I walk up those stairs without even breaking a sweat.”
Yoo Yeon-ok, 75, who is Ms. Ji’s partner for demonstrations and a black belt, has helped generate excitement about taekwondo within her own family. “I have a 10-year old grandson who started to learn taekwondo after watching me perform on television,” Ms. Yoo said with pride. “He has been learning taekwondo since he was seven.” Even her older granddaughter, who is in fifth grade, has picked up the habit. “She has been going to a taekwondo gym for a month. She has been influenced by her little brother and me.”
“I advise women of our age to take up taekwondo,” Ms. Ji said. “What else can old people do but linger around the house? And it is sure better than staying at home and fighting with your daughter-in-law.”