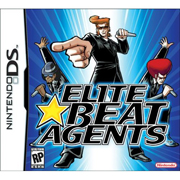 An office secretary wants to dance with the company heir at a party, but first she must get all the other secretaries’ work done. A famous sculptor has one month left to craft the greatest works of his career. A little boy must defeat a bully at dodgeball to impress his sweetheart.
What to do? What would anyone do? Summon a squadron of madly energetic male cheerleaders and a J-pop soundtrack to help, of course!
This is the harebrained premise of Osu! Tatakae! Oendan! (Hey! Fight! Cheering Squad!) for the Nintendo DS, and it’s simply the most fun I’ve ever had with a game on this console.
This is also the first rhythm game on a portable console that is actually worthwhile. Others, which depend on the limited number of buttons to be hit in time to the music, tend to feel like scaled-down versions of Dance Dance Revolution (and without the workout to boot!), but the DS touchscreen opens up the possibility of varied configurations and options.
The top screen is also put to good use ― while you guide the cheerleaders through their routine on the touch pad, the story of your mission unfolds on top in comic book form. And this part doesn’t feel slapped on. The art is very appealing, and the stories themselves are hilarious. My particular favorites followed a male teacher at a girls’ high school and a down-and-out racehorse who throws his jockey to chase a robber.
Most of the stories (and the premise) are uniquely Japanese, however, so the game was issued in a different version for its English release as Elite Beat Agents. The gameplay is roughly the same, but with American pop music, a new storyline and a Blues Brothers-style traveling hipster crew in the place of the cheer squad.

This has to be the most successful localization of a Japanese title I’ve ever seen ― all the charms of the original are still here, and the new stories are just as amusing. It feels more like an English-language sequel than the same game, and if you like one it just makes sense to buy the other as well. (Both are fairly common at the game booths in Yongsan.)
The idea behind Oendan! may be weird, but I suspect the world would be a better place if people spent more time cheering on their fellow man. So what are you waiting for? Don your headband and get to it! By Ben Applegate