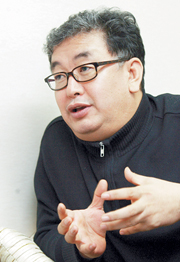 The co-president of SidusFNH, Cha Seung-jae, 47, has been appointed chairman of the Korean Film Producers Association. Mr. Cha is considered one of the pioneers who inspired a renaissance in the local film industry. Mr. Cha has produced films that have widespread appeal and a challenging spirit. They include “Beat,” “Christmas in August” and “Memory of Murder.” SidusFNH was founded by Mr. Cha and its co-president Kim Mi-hee, two years ago and is now the biggest film production company in Korea. Last year, it released 12 films. Mr. Cha spoke about the challenges faced by local production companies.

Q. You have taken on great responsibility at a difficult time.
A. The reduced status of producers is one problem and rising production costs are another. Five years ago, average production costs ranged from 1.5 billion won [$1.6 million] to 2 billion won per film but now they have increased to 3 billion won.
On top of that, an additional 2 billion won is spent on marketing, which means that a film needs to attract at least 1.5 million paying customers just to cover expenses. The Japanese market helped for a while but not anymore. Filmmakers need to focus more on the content of a film rather than its spectacle. For the industry to prosper, producers will need to be more in charge of the process.

As long as a film is great, does it matter who is in charge of it?
The director decides the overall course of the movie, but the producer is the engine that drives it. It was the producers who made the resurgence of Korean films possible. Producers do not waste the money they earned from films. They reinvest it in the film industry to make better films. While it is has become more difficult for producers to make money, the fees earned by actors and directors have escalated. Under these circumstances, it is simply impossible to make good films.

Currently, you, as the representative of producers, are negotiating with film industry unions regarding working hours and wages. When the proposals are put into action on July 1, the long-standing issue of improving film industry working conditions will somehow be resolved. However, will this mean higher production costs?
Those who have earned so much need to be paid less. Various simulations show that the increase in production cost is about 5 percent. The union is not asking for a big raise. The negotiations will serve as a turning point in rationalizing the film industry. In fact, film production and distribution costs have not been measured carefully enough and planning has been slack. Now we have reached a point where lack of attention to the production process has lead to an increase in production costs. The situation calls for production companies and producers with better planning ability.

SidusFNH did not have a good year last year. Among the 12 films it released, only two, “The War of Flowers” and “My Scary Girl,” made profits.
Actually, four of our films, including those two as well as “A Dirty Carnival” and “Lump Sugar” broke even. Last year was a harsh year overall for the film industry. One hundred and ten films were released last year but fewer than 20 films made a profit. Considering that, SidusFNH did not do so badly. With a movie released each month we were not able to focus adequately on each film. Thus we are trying to cut down on the number of films this year. At this point we are aiming for eight, but it will probably be around 10.

Many directors seem to leave for other production companies once they are successful.
If we cannot accommodate their demands, there is nothing much we can do about directors leaving the company. It is almost natural that they leave once they reach a certain level of fame. I have never taken it personally. As a producer, to discover and nourish talented individuals is my duty and pride. We have not pursued producers with inflated salaries. To accommodate all their demands and make a profit might be one way, but I do not think that is the way to go.