A dance club returns to its ‘techno’ roots

A dance club returns to its ‘techno’ roots 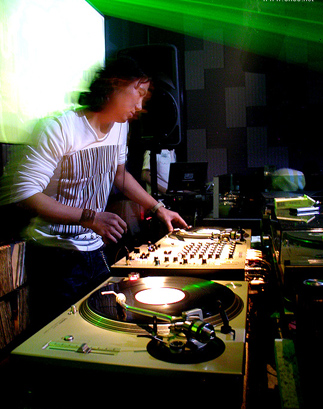 Once upon a time when electronic dance music was born, they named it “techno,” and arbiters of Korean underground culture searched desperately for their musical inspiration. In Seoul, one of a few underground clubs unknown to the public was Club M.I. near Hongik University, northwest Seoul.
Circa 1996, M.I., which was short for Musical Intelligence, was nothing more than a tiny underground watering hole with a small disc jockey box. To this day, those who witnessed this apex of the electronic dance music scene remember the meaning of hip and cool. The story of now-defunct clubs that gave birth to today’s generation of electronic music lovers in Seoul is now the stuff of legends; the club scene became too big and too mainstream. When everybody begins doing something, it’s no longer hip.
A handful of trendsetters in town want that scene back but adjusted to fit the year 2007. The original owners of Club M.I., who moved on to Club M2 and popularized techno music in Korea, updated their former club and opened it as Club Via last year. Over the past months, through word of mouth and a small number of fliers, there have been unofficial gatherings of the unspeakably cool, dancing away the early hours of the morning on weekends.
A well-known D.J. is getting ready to enter the Club Via scene. Last December, the disc jockey Yeonjun, who can be seen spinning on weekends at Club M2, announced that he started his own production company and label, called Housegraphy, with two of his colleagues (D.J. Baram and Eugene Blake) at M2. Housegraphy will be teaming up at Club Via with Sway Productions, whose chief executive, Miggi Chi, remembers the days when a few obscure clubs in the Hongdae area set the standard of cool.
The revival of “the deep house music scene” kicks off tonight at Club Via as two trend gurus host those who want to drink champagne and dance to real house music. The “Sunrise with D.J. Yeonjun” party will be held every first Friday of the month. Admission is 10,000 won ($11) with one free drink. For inquiries, call Sway Productions at (02) 544-3467.