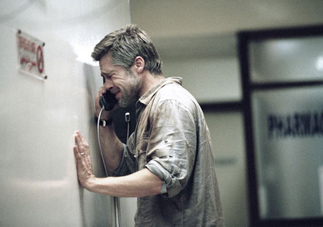 Brad Pitt is one part of a vast ensemble in “Babel,” a film shot around the world about the barriers to happiness and understanding human beings face.

Honest communication is the most difficult social task human beings face. There are so many ways to be wildly misunderstood, or worse, ignored entirely.
“Babel,” last year’s moving film by Alejandro Gonzalez Inarritu and Guillermo Arriaga, now finally arriving in Korean theaters, is, as its title implies, an examination of all the barriers that wreak tragedy on human relationships every day, all over the world.
The central event is the accidental shooting of a female American tourist (Cate Blanchett) in the Moroccan desert from hundreds of meters away by two shepherd boys playing with a rifle. Following are the stories of the shepherd family, of the injured woman and her husband (Brad Pitt), of the Mexican nanny (Adriana Barraza) who takes care of their children, and finally of the deaf-mute daughter (Rinko Kikuchi) of the Japanese hunter (Koji Yakusho) who left the rifle in Morocco in the first place. The format will be familiar to anyone who has seen “Syriana” or “Crash,” though this film’s characters do not continuously and implausibly collide like those of the latter.
“Hyperlink film” is a term that, even if not wholly accurate, at least properly expresses the feeling of watching such films. Just as the Internet has removed all limits on knowledge, privacy, linear thought and good taste, this brand of film follows disparate stories connected by but not relevant to a central narrative. But “Babel” in particular is a sort of cinematic panopticon, laying the lives of its subjects so completely bare (sometimes literally) that nothing is left to get in the way of understanding.
The film starts out with the most obvious social barrier ― language ― and it’s this one that will be most obvious to any English speaker who cares to see the film in a Korean theater. Unless your Hangul reading is excellent or you happen to speak fluent English, Japanese, Spanish and Arabic (which, I suppose, is not entirely impossible) you will find yourself shut out of some part of this story ― an accidentally eloquent addition to the film.
The most striking example is that of the deaf Japanese teenager who struggles to find some kind of human connection after the suicide of her mother. Inarritu follows the pure visual stimulation of playing in a fountain with a trip to a dance club ― for the hearing audience it’s a perfectly natural transition ― but then he cuts out the sound. What a simple way to show how an experience exciting and commonplace for one might be terrifying and alienating for another.
On another level altogether, it’s wonderful to see a film so carefully and artistically crafted winning Hollywood support. Admirably and appropriately, every part of “Babel” is shot on location, and every location bursts with energy and emotion: the disorienting but contagious joy of the Mexican wedding, the spinning concrete and lights of Tokyo, the cruelty of the Mojave desert, the silent, unsympathetic majesty of rural Morocco. There is not a single weak acting performance, and the music by Gustavo Santaolalla, heavy on the guitar, is melancholy and evocative.
For all its tragedy, “Babel” is a firm affirmation of basic human goodness. There’s prejudice, yes, but also a stolid faith that we all really would just like to get along. How, despite the best intentions, we still manage to get lost and hurt one another is this movie’s subject and its only real antagonist.