Stand-up comedy where the successful sit

Stand-up comedy where the successful sit 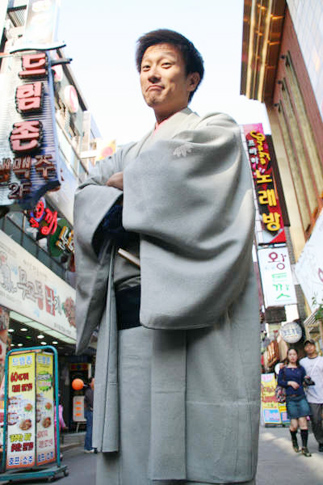 All a glibly charming Rakugo performer needs on stage is a small cushion to sit on after he accomplishes his mission: getting a laugh out of the audience with the punch line.
Shoichi Matsumoto, or Ginpei Shofukutei as he is known on stage, is pretty good at this. Japanese audiences howl with laughter when he impersonates an idiot who is out to fool an udong (fish cake) restaurant owner. But a surprise waits for them regarding Matsumoto’s nationality.
“Mr. Matsumoto is a third-generation [Korean] in Japan,” said Kim Young-shin, a spokesperson at the Japan Foundation in Seoul. “He considers himself both Korean and Japanese, and he is personally very enthusiastic about bridging the two cultures.”
Matsumoto is coming to Korea to perform his Rakugo. He will be speaking in Korean, which he is fluent in but which he is less familiar with using on stage to deliver Japanese humor.
With a tradition that goes back 300 years, Rakugo is Japanese stand-up comedy derived from storytelling. Without any music or stage effects, the Rakugo performer stands alone in the middle of the crowd spilling his comedic monologue.
Ginpei Shofukutei learned his Rakugo skills from Tsurube Shofukutei , an actor and a legendary Rakugo master in Japan, and quickly becoming a popular figure in the local Rakugo scene. In 2005, he gave his first Korean-speaking Rakugo performance, gaining even more media attention from Japanese documentaries and news programs.
“We invited Mr. Matsumoto as an introduction to understanding traditional Japanese culture and humor,” said Ms. Kim. “He is a very popular man in Japan.”
Along with the Japan Foundation, this event is sponsored by the Japanese literature studies and research centers from Chung-Ang University, Chonnam University in Gwangju and Pusan University of Foreign Studies in Busan.


Ginpei Shofukutei will give free performances in Seoul on March 12 in the Chung-Ang University’s graduate school building at 2 p.m. with an additional performance following at 7 p.m. in the Japan Foundation’s Seoul cultural center in Gwanghwamun. Reservations are necessary. For information about performances in Gwangju and Busan, as well as the performance in Seoul, call (02) 397-2840 or visit www. jpf.or.kr.