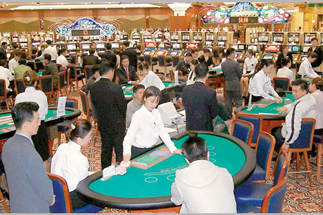 Occasionally it’s great to get out of the city and enjoy some clean air. Add beautiful scenery and the opportunity to gamble and you have the makings of a great weekend.
Hence, on a Friday morning in late February, I found myself in the Kangwon Land casino in Jeongseon, Gangwon province. Although it was nearly 4 a.m. the place was packed with people flipping chips, playing cards and feeding slot machines.
Kangwon Land opened seven years ago. It was built on the ruins of a mining village and it’s the only casino in the country that allows Koreans to gamble.
The only sign that Kangwon Land had once been a mining community were the slag heaps that lined the approach road and the small houses outside the resort that still retained their original forms.
The other casinos in this country only allow foreigners. So it was not surprising that most of the gamblers at Kangwon Land were Koreans. Only a few foreigners were in attendance and all of them were from other Asian countries.
The casino had none of the atmosphere of a James Bond movie. This is not Casino Royale. No one at the slot machines or the poker tables had a dry martini, nor were they wearing a neatly tailored tuxedo. At the bar there were no beautiful women wearing nothing but a smile and a diaphanous silk dress.
On the contrary, the patrons wore sweat pants or jeans and winter jackets and sipped free drinks at a bar next to the ATM machines. Instead of whiskey, martinis or any other type of sophisticated cocktail the complimentary beverages were iced coffee, sodas and fruit juice. The drinks, in green plastic cups, were self serve, and conveyed an image that said Misari, not Monte Carlo.
Despite the hour hardly anybody left their seat and getting a spot at a card table was more like a mission impossible than 007.
Despite their blood shot eyes and unkempt appearance, as if they had been playing for three days, many patrons kept going as if a fortune was guaranteed to materialize with the next hand. 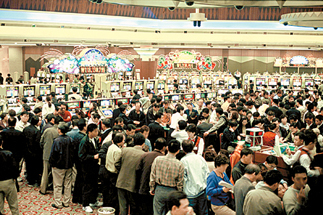 On the main floor of the casino there is row upon row of slot and video gambling machines, 960 in all. Several have a top jackpot of more than 400 million won ($425,750). A few visitors grabbed some sleep while slouching on sofas, as if they dared not risk going to their hotel room for fear of missing a big score.
According to Kangwon Land there are 50 blackjack tables, 62 baccarat tables, four Caribbean stud poker tables, 10 roulette tables, four Tai-Sai tables and two big wheels. Some people gambled on more than two tables simultaneously. Some of the slot machines were left to bet automatically until they hit a jackpot. At these machines a jacket or cigarette packet was left as a marker to tell others that that machine was occupied. Either a piece of folded paper or the end of a plastic card is placed on the buttons so that the wheels keep spinning.
At a Tai-Sai table, a gambler kept leaning across the dealer to bet while sitting at the neighboring roulette table. “You’re quite a busy gambler,” said the dealer, showing signs of being annoyed. The gambler only smiled and placed more chips on the table.
At some blackjack tables the minimum bet is 1,000 won and the maximum is 300,000 won. The poker table has a higher minimum. Other blackjack tables have a minimum of 10,000 won. At some of these, high rollers bet big sums on each hand.
My visit took place in the small hours of Friday morning and people kept coming in although the casino closes at 6 a.m. on weekdays ― it reopens at 10 a.m. On the weekend Kangwon is open continuously from 10 a.m. on Saturday morning until 6 a.m. on Monday. It has been rumored that, on some Monday mornings, luxury cars are sold cheap at pawn shops outside Kangwon Land after their owners were forced to surrender them to pay gambling debts. In fact, the stores at the entrance to Kangwon Land were either pawn shops, some selling luxury cars, or ski rental outlets serving the High1 ski resorts, which sits next to Kangwon Land.
But if one does not go overboard it’s possible to have a good time at the casino without losing one’s shirt ― or one’s car. 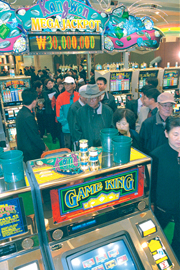 In fact I won 6,000 won by investing 1,000 won in a slot machine. But then I lost 10,000 won in an hour while playing the big wheel.
While the parents are getting addicted to gambling, the kids need some entertainment of their own. Especially as, besides the casino and the ski resort, the neighborhood has little to offer. Resort staff will arrange excursions for guests at locations to the east, where there are beaches, or to the mountainous Taebaek region, but most adults prefer to stay close to the gambling action. They want their children nearby but they don’t want to be distracted from the tables. For these families Kangwon Land offers a theme park called, “Adventure Palace,” which is just two floors below the casino.
This place is not a theme park on the scale of Disneyland or Lotte World. It has no roller coasters or Vikings but it does offer virtual reality rides such as Marine Tour, Bobsled, Helicopter Jump and Race Car.
Marine Tour simulates a submarine journey and it does a 360 degree turn which makes blood rush to the head. Anyone who has a driving license may think the Race Car ride would be easy, but that’s not true. The controls are difficult and one can easily spin off if too much acceleration is used. All rides at the Adventure Palace, including the 3D animation theater, are available to those who purchase a 12,000 won ticket.
The palace has a theater called the Miracle Stage where magicians, belly dancers and Chinese acrobats perform every 30 minutes. The magic show is, however, more like comedy for adults since the strings that are used to hold objects in midair are visible. Even the card tricks are ones that every grown-up has seen. According to an employee, the theme park is usually packed on the weekend, especially after 6 p.m., with visitors from other Asian countries. In fact, at 4 p.m., the nearly empty theme park had a few underage children running around who were suddenly joined by 20 or so Chinese visitors. 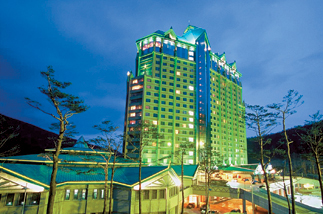 When gambling becomes too much and an empty wallet threatens to bring on depression, traveling to the peaks of the High1 ski resort is a pleasant idea. There is a bus in front of Kangwon Land’s main hotel that travels to the ski resort, which is about five minutes away.
There is a gondola that goes to the top of the ski slopes and it’s free until 12.30 p.m. The ride on the gondola takes approximately 30 minutes but the view on the way up, and at the top, is breathtaking. The mountainous area displays the beauty of Korean nature at its best. The ski resort, which opened its doors for the first time in December last year, has the longest ski slope in the country. 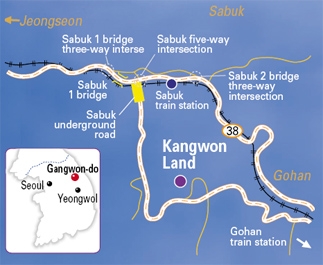 For those traveling by public transport, take an express bus that goes to Gohan from the Dong Seoul Bus Terminal. The bus ticket can only be purchased with cash. It takes approximately two and a half hours to get to Gohan. The earliest bus leaves at 8:30 a.m. and the last bus departs Seoul at 10:30 p.m. At Gohan take a taxi ― walking to the main hotel, where the casino is located, is just too far from the main entrance. The taxi driver will charge 6,000 won. Passengers can also get off at Sabuk and take a taxi from there. The charge will be 5,000 won.
Those who plan to travel by rail should take the Mugunghwa train from Cheongnyangri station. The train takes between three and four hours. Passenger can alight at Sabuk or Gohan and take a taxi to Kangwon Land.
The standard room rate at the Kangwon Land main hotel is 200,000 won per night.
The presidential suite, which covers 294 square-meters, is 4 million won a night.
In total there are 674 rooms in the 24 story building.
Check in starts at 1:00 p.m. and check out is at noon.