A short walk on alternative street

A short walk on alternative street 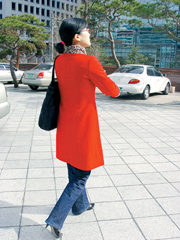 It’s a peculiar habit for a grown woman, but I have a thing for occasionally wondering aroun.d the streets of Seoul with no purpose in mind, like some lazy traveler searching for easy distractions. Usually the best time for me to meander is Sunday afternoon, after I have gotten all my family obligations out of the way and thrown my laundry in the machine I leave home in a pair of sneakers with my favorite travelogue in hand.
Seoul is a great place for these journeys. It’s the perfect city in which to feel like a complete stranger, even though you’ve lived here all your life.
My perambulations normally stay within the boundary of northern Seoul. No bias. I am just a downtown girl at heart. Recently I drew a map for my cultural excursion. Then I took a day trip to those spots. There are random parks, cinemas, libraries, concert halls and teahouses that cater to a small crowd, often run by the very people who own them because they simply love what they do. The places could be alternative, underground, independent or whatever you want to call them. The point is they represent the nation’s subculture, which is based on democratic ideals about art and culture.
For me these are highly personal spaces. I’ve spent the past six years of my free time in these spots, reading a favorite book while sipping my favorite cup of tea or watching some of the art-house films I’m in love with. My trips have been the cultural pilgrimage of my urban life. 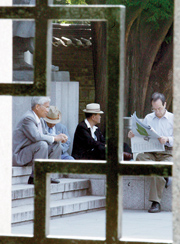 Tapgol Park, a place with a history of struggle among the counter-culture.

I leave from Tapgol Park, mainly because it’s an odd memorial park in central Seoul that seems to be caught in the past. It was the nation’s first modern park, built in 1897 by a British counselor, J.M. Brown, as a tribute to the Korean Empire. It has a historical significance as the spot where independence activists under the Japanese colonial regime made their declaration on March 1, 1919.
Today, aside from protests by right-wing activists during national holidays, the park is more famous as a shelter for the homeless, and a pace for senior citizens to kill time during the day. One can encounter occasional tourists with a guidebook, but they tend to leave quickly after they discover the gambling pensioners and men taking naps with their face covered by newspapers near the stone monument. On a recent weekday afternoon a group of elderly activists were handing out free Korean flags to passers-by to promote nationalism but few people seemed to want them.
I take the crosswalk from the park southbound to Jongno, which is a peculiar area. Its neighbors are some of the busiest tourist districts in the city like Insa-dong or Cheonggyecheon. Yet the neighborhood itself is famous for being non-descript. It’s main feature is an astonishing number of language institutes that line the streets. Despite its dearth of character there are some rare movie theaters in the vicinity that show auteur films.
Sponge House in Jongno 3san-ga, which used to be called Cine Core, is one of them. The theater is one of the few places where one can walk in at any time during the week and still find seats available. The cinema’s customs are slightly different as well. For example, after the film finishes the lights stay off until all the credits have rolled. The theater also sells delicious home-baked cookies and gourmet coffee that’s so much better than the bland, lukewarm caffeine sold in many multiplex theaters. On a darker note, the seating is not deluxe. The seats have no cup holders, there is no popcorn and definitely no couple seats.
I saw “Babel” there, a painful film by Alejandro Gonzalez Inarritu that has three episodes set in Morocco, Japan and Mexico. The film explores our attitudes to violence and the traumas people undergo in an alien world.
Sponge House is often thought to be a place that only shows films from outside the mainstream, but that’s only partly true because of the nation’s film distribution system, which rarely gives smaller independent films a chance.
Nowadays, as a marketing ploy, the theater has been showing a lot of films by celebrity directors including Woody Allen’s “Scoop” and Hou Hsiao Hsien’s “Three Times.” Both films are now playing. 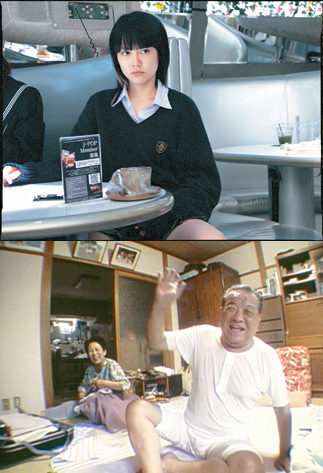 After “Babel” I move to the Seoul Art Cinema, another theater nearby which regularly holds retrospectives of major masters.
This week they are having a special screening of British new wave cinema, focusing on works by British directors such as Lindsay Anderson and Jack Clayton who were part of the “free cinema movement” in the late ’50s, which was rooted in neorealism. The highlight will be a screening of Anderson’s “This Sporting Life.”
Seoul Art Cinema has undergone a complete change since two years ago when it was called the Hollywood Theater and played commercial films. But the atmosphere of the neighborhood has stayed the same.
For years Nakwon-dong, where the SAC is located, has been regarded as strangely damp and melancholic, even though it’s right in the center of the city.
A major contributing factor is the domineering presence of the old concrete slabs used to build the arcade where the theater is located and the narrow alleys surrounding the building, which exude the distinctive aroma of steaming meat from the cheap stew joints that fill the area.
The arcade is enough to classify the neighborhood as an underground destination within the city. But the theater also established its alternative spirit two years ago when they hosted the Reafan (Real Fantastic Film Festival), a film festival that was put together with individual donations from directors and ordinary cinephiles as a backlash against the PiFan (Puchon International Fantastic Festival), after some of the PiFan staff were fired by the city’s mayor for screening the gory cult films that were the festival’s trademark.
The two festivals opened the same day. On the opening night, however, a substantial number of leading Korean film directors, actors and producers showed up at the Seoul Art Cinema to support their militant spirit. Leaving the theater’s forth floor location can entail a long trip, mainly because the building has one of the slowest elevators in town. The trip can feel much longer if one gets stuck with a group of overly-enthusiastic visitors to “1,2,3 Colatech,” a famous night club for middle aged Koreans that’s just across from the theater.
Last fall I watched one of the saddest films I have seen in my life. It was a documentary called “Dear PyongYang” by Japanese-Korean director Yang Young-hee.
It told the story of the director’s own father, a leading activist for pro-North Korean residents in Japan, who sent his three sons to the North as a tribute to communism when Ms. Yang was six. I cried my eyes out until the lights were turned on, when I ran to the bathroom. The theater where I saw the film was Cine Qua non, a small cinema in Myeong-dong that specializes in contemporary Japanese films.

If I have time before a concert in the evening the two places I always visit are Hakrim and Trans Suyu.
Hakrim, which opened in 1956, is a small teahouse in Daehangno that was always packed with student activists in the ’70s and ’80s. The names in the scrapbooks that were compiled by patrons from that time are telling. They include established poets and critics from the current literary scene.
Then there is “Research Machine Suyu+Trans,” a dynamic group of Korean researchers in the humanities field who regularly hold seminars, publish books and hold yoga classes. It’s a whole new concept for an intellectual community; they gathered to develop alternatives to mainstream academic theories propagated by university professors in Korea.
To outsiders, Suyu is a great place to hang out on weekends, reading books in their extensive library or taking courses, which range from literature to art to philosophy. It’s impossible to speak about the alternative underground without mention of Friedrich Nietzsche and, sure enough, starting in the spring semester, one of Suyu’s researchers is offering a series of seminars on the aphoristic German philosopher . 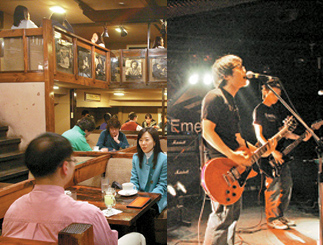 Left,Taking tea at Hakrim, where the poets and novelists of the ’70s and ’80s once met.right,Musical alternatives are explored at clubs in Hongdae.

By 7:30 p.m. I am in Hongdae. After a quick bite I head to Ssam, a live club on the second floor of Ssamzie Space, a gallery that features emerging Korean artists. The club hosts underground rock bands who normally perform on the area’s live stages. The admission is surprisingly cheap, 12,000 at the door and 10,000 for online reservation including a free drink and snacks.
The crowd is relatively young, but the genre of music varies every night and ranges from folk to soft rock. The stage is rather small with humble lighting. The night I visited three bands performed, one of which was called “Breeding,” made up of three Americans and a Korean vocalist.
In truth, Hongdae no longer has the same alternative spirit as it did five or six years ago.
Many galleries and playhouses that were once the city’s cultural landmarks have closed down; bookstores and record shops have been replaced by expensive lofts, clubs and designer boutiques.
Nevertheless the music scene in Hongdae still features some dynamic styles. And Club Ssam has been something of a musical evangelist in the area. On every third Friday of the month the clubs in Hongdae throw a “Sound Day,” in which, for the price of one admission, you can enter most clubs in the area.
By the time the concert finished, Hongdae’s young crowd was just beginning a long night.
At the end of the day, alternative culture in Korea is being rapidly assimilated into the mainstream, especially if it involves any form of activity that seems likely to make money.
Increasingly the notion of subculture is more about products than ideals. Maybe, in five years, it will only get worse, in which case the only place to truly experience the city’s heartbeat will be its streets. It’s an unpleasant scenario.
But meanwhile I will throw away my worries and keep wandering. As the Scottish novelist and poet Robert Louis Stevenson wrote, “It is better to travel hopefully than to arrive.”