Students’ artwork swims with the fishes

Students’ artwork swims with the fishes 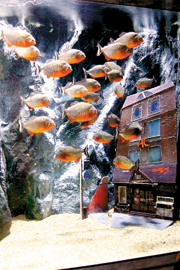 For decades, or perhaps centuries, human beings have been trying to communicate with animals. A unique exhibition shows how artists, not scientists, are playing their own part in that ongoing quest.
The exhibition “Dreamer Aboard the Submarine” taking place at 63 Seaworld is a collage of installation artwork shown in a marine environment.
The first of its kind to take place in Korea, the exhibition itself incorporates a new concept of what art and exhibition are, leaving behind the minimalist walls of the art gallery and moving to an aquarium where art is the last thing visitors, mainly families with young children, expect.
The exhibit is being hosted jointly by the aquarium and Hongik University, which is renowned for its art programs. A total of 50 students participated, presenting 51 pieces of art.
Despite the exhibition’s title, no submarines are involved in viewing the works. The artwork is in fish tanks, above animal tanks and in photography and video installations throughout the aquarium.
The installation pieces are sculptures placed in tanks amid schools of swirling fish. Most of them try to tell a story about human beings’ relationships with undersea creatures. For instance, the piece “I Know You” features a series of buildings decorating the aquarium where it has been placed. Normally, fish tanks are used to decorate people’s houses, but now, the roles have been reversed. 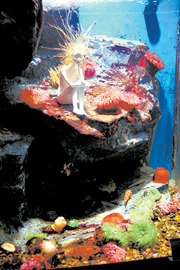 ‘Thinking Person’ shows someone lost in thought at the bottom of an imaginary sea. By Wohn Dong-hee

Some of the art takes a more experimental, conceptual form. Kim Ji-young’s “Listening” is a stethoscope attached to the fish tank so that people can listen to the sounds inside.
Seo Jae-ho’s “Sleeping Baby” has a model of a 100-day-old baby inside a tank, reminiscing about the time when he floated in his mother’s womb.
The work “Space” features folded paper cranes in a fish tank, combining air and water creatures in a single space.
Some of the artwork is specialized for the animal with which it is being exhibited. For instance, in the reptilian section, there is a piece with tiny figurines of Wendy walking the plank, while the evil Captain Hook and Peter Pan hover in the air. This installation was suspended above a huge crocodile, most likely oblivious of the situation taking place above its head.
The exhibition began on Dec. 12, but was not promoted in art circles. Also, most of the visitors passed by the artwork not even realizing that a special exhibition was taking place.
The exhibition continues until March 31 at 63 Seaworld at the 63 Building in Yeouido, Seoul.
The aquarium was renovated last year and now covers two floors and features a new penguin section.