Masterpieces made with clay

Masterpieces made with clay 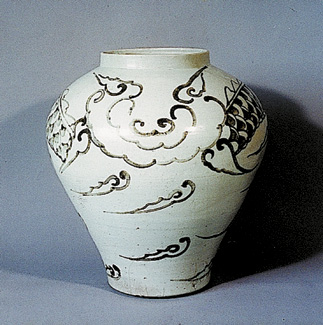 11th in the series | Korean Porcelain

The World Ceramic Biennale 2007, organized by the World Ceramic Exposition Foundation, is less than two months away. It will be held at the Icheon World Ceramic Center, Gyeonggi province. Since 2001, the event has attracted the interest of porcelain aficionados from all over the world.
According to the World Ceramic Exposition Foundation, Korean porcelain is highly valued. As examples they cite a white porcelain plate from the 15th century that sold for $3 million at a Christie’s New York auction in 1994 and a white porcelain jar from the 17th century that reached a record price for ceramics of $8.4 million in 1996, also at Christie’s New York. This record stood until 2006 when a ceramic piece of Chinese origin was sold in Hong Kong for $19.3 million.
Korea’s celadon porcelain, also known as Goyreo cheongja, was the variety that put the country on the global ceramics map between the 10th and 12th centuries, when Korea’s porcelain culture peaked. Jade-green celadon porcelain developed originally in the 9th century, during the Silla Kingdom. Porcelain experts say it originated in China.
The Silla Kingdom adopted Buddhism and the tea culture associated with the religion ― in Buddhist practices tea is believed to clarify the mind. This boosted the demand for tea pots and cups made from celadon porcelain. Yet it was in the Goyreo dynasty, which began in A.D. 918, that celadon porcelain developed the sophistication that makes it still popular today.
“Every Korean who has at least an elementary education knows Goryeo cheongja and understands that it is a cultural asset that’s representative of Korea and is better known than the Seokgulam temple in Gyeongju,” wrote Kang Kyeong-sook in her book “A Study of Korean Pottery.”
According to Kim Young-won, head of the art department at the National Museum of Korea, Goryeo cheongja, which was created in the 11th Century, was recorded as the world’s best in a publication written during China’s Song Dynasty. 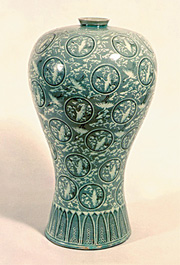 Baekjacheolhwaunryongmunho, from the Joseon Dynasty, sold at Christie’s in 1996. [JoongAng Ilbo]

“The color of Chinese cheongja was strong, the glaze thick and opaque, the structure sharp and grand,” said Chung Yang-mo, former director of the National Museum of Korea who has published a book on Korean celadon porcelain. “The Goyreo cheongja has a clear but faint celadon-green glaze. It has elegant lines and a structure that is flexible and full of movement. The patterns are strong with poetic refinement. It was during the 12th century that Korea perfected the copper glazing technique, which brings out the reddish colors in porcelain.”
Celadon represents a major technological and conceptual shift in the history of Korean ceramics. The high-fired gray stoneware of the preceding United Shila Dynasty (668-935) had set the stage for the manufacture of celadon, but the technology of the celadon glaze and the kiln structure, adapted from China, was an important advance.
Goyreo cheongja was made during a time when Buddhism was dominant. Buddhists believed that jade-green represented the nether world. In addition, the lotus, a flower that is often used in Buddhist painting, is a frequent decoration on Goyreo cheongja.
Among the Goyreo cheongja, Somun cheongja, a celadon porcelain that has no pattern, was the most common. The appearance of Somun cheongja is different from the grand Chinese porcelains. These cheongja were focused on natural harmony and balance, using smooth lines. There were mostly made in the 12th Century.
Samgang cheongja was the apotheosis of Goyreo cheongja. This technique, which has never been seen or practiced in other parts of the world, was first developed during the reign of King Uijong (1147-1170).
The method involves drawing a pattern before the porcelain has dried. White or red sand is placed on the pattern and then painted with jade-green colors before the piece is put into the furnace. Most of the patterns were of clouds or chrysanthemums.
The defining characteristic of Samgang cheongja is that there is a lot of space within the patterns. Additionally, the drawings were more like paintings and included bamboo and flowers. The best examples of Samgang cheongja that remain today are the Jukmun, owned by the Ewha Womans University, and the Moranmunmae at the National Museum of Korea.
Another type of Goyreo cheongja is Sanghyeong cheongja, which took the shape of animals and objects, including flowers. Many are shaped like lions, monkeys, ducks, watermelons, bamboo or lotus flowers.
The Goryeo cheongja started to decline after the Mongolian invasion of the early 13th Century. It was about this time that Western and Middle Eastern cultures started to influence Goryeo through China’s Won Dynasty. By the end of the 14th century the structure, quality and patterns as well the manufacturing methods had been heavily distorted or lost.
During the Joseon Dynasty (1392 - 1910), at the start of the 17th century, Korean porcelain moved from jade to white under the influence of Confucian culture. White represented integrity, innocence and modesty. There are two famous types of porcelain from this period ― buncheongsagi and baekja, commonly known as white porcelain.
Buncheongsagi is based on the structure of the Goryeo cheongja. However, unlike the Goryeo cheonga or baekja, buncheongsagi is bolder and freer in style and structure. Some of the patterns were simplified. The color is grayish and the quality is very much like celadon porcelain.
Buncheongsagi began to lose its popularity in the late 16th Century as more people opted for white baekja. During the Japanese invasion under Toyotomi Hideyoshi, between 1592 and 1598, the Joseon people. heavily influenced by Confucianism, completely ignored buncheongsagi and only used baekja.
After the Japanese invasion of 1592 many masters of buncheongsagi were taken to Japan by force and that brought about the decline of Joseon Dynasty buncheongsagi and the blossoming of the Japanese porcelain industry.
In the early Joseon Dynasty, baekja became smoother and whiter. Most pieces were simply white without any pattern.
There are four types of baekja: Sunbaekja, cheonghwa baekja, cheolhoe baekja and jinsa baekja. The white porcelains could be differentiated by the way they were made and the colors that were mixed.
Sunbaekja is known mostly for the smooth line of its curves that follow the tradition of baekja manufactured during the Goryeo Dynasty.
Cheonghwa baekja has a blue pattern that uses cobalt which was imported via China by Arab merchants.
Historians claim Korean pottery was born around 7,000 to 8,000 years ago, during the New Stone Age. At that time pots were fired at temperatures below 1,100 degrees Celsius.
The only countries that could make quality pottery at this time were China, Vietnam and Korea. Korea’s pottery saw a rapid advance in sophistication during the early Three Kingdoms period, between the 3rd and 4th century A.D.
In her book Ms. Kang says the clay pottery of the Goguryeo Kingdom was heavily influenced by the Chinese Han dynasty, whose pottery was grayish.
The Goguryeo pottery was brown or black. The representative pottery of this kingdom is Hwanggalsaekgwanggusaiho whose end is shaped in the form of a trumpet and has four knobs.
It has been said that Korea’s porcelain industry improved rapidly in the early 9th Century when the Unified Silla Kingdom began an active trade relationship with China.
In particular, pottery masters in Silla and Gaya were able to make ceramics that were as hard as metal, with a grayish blue color, by firing pots in furnaces that were heated to over1,200 degrees Celsius.
“The transformation from earthenware to porcelain was a huge development for the culture of mankind. And the countries that led this outstanding porcelain culture were China and Korea,” said Mr. Chung. “The rest of the world was not capable of producing fine porcelain until the 17th or 18th Century,” Mr. Chung added.