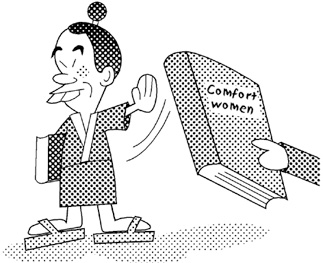 The Kono Statement is an official Japanese government document issued in August1993 acknowledging the comfort women during World War II and expressing an apology. Then Chief Cabinet Secretary Yohei Kono issued the statement after an investigation that lasted a year and eight months. The statement acknowledges that military authorities were involved in setting up brothels while agents recruited the comfort women on behalf of the military. Women were often misled or enlisted forcibly. It also says that the government had direct involvement in the operation of comfort women as sex slaves.
The catalyst for the Kono Statement was the testimony of Seiji Yoshida, exposing the forced recruiting of comfort women. Mr. Yoshida revealed that during the Pacific War he had forcibly taken 6,000 Koreans while he served as a labor mobilization director for Yamaguchi Prefecture, and many among them were comfort women. Asahi Shimbun reported his testimony in 1991, focusing attention to the comfort women issue. A series of open testimonies by former comfort women followed in Korea.
Mr. Yoshida, however, faced fierce criticism after the exposure. Renowned Japanese historian Ikuhiko Hata attacked Mr. Yoshida as a “career fabricator,” claiming that his field investigation on Jeju Island provided no evidence or testimony supporting Mr. Yoshida’s argument. Cornered by the criticism, Mr. Yoshida confessed that the dates and locations of the some of the incidents were made up. Consequently, a critical opinion of the Kono Statement spread around Japan. Prime Minister Shinzo Abe is a notable skeptic among politicians. In April 2005, he said in a lecture that the issue of comfort women was fabricated by Mr. Yoshida, but the Asahi Shimbun went ahead and reported it, and the story created by the Japanese media spread abroad. However, Mr. Yoshida did not deny the forcible mobilization itself altogether. He had established the Monument of Apology in Cheonan, Korea, at his expense. Those campaigning the disposal or revision of the Kono Statement argue that there has not been a single official government document found that proves the forcible nature of the mobilization of the comfort women.
However, it is fundamentally doubtful whether this tragedy would be recorded in official documents. It is hard to understand why the testimony of living victims is not recognized as evidence. Hundreds of comfort women from Korea, China, the Philippines, Taiwan and the Netherlands are testifying to the forcible recruiting of comfort women.