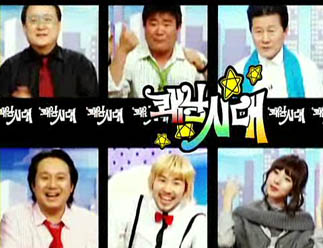 A scene from “The Age of Good Fellas,” a variety show that reflects on the society of middle-aged men. [KBS-TV]

The Korean word ajeossi deserves a new definition for the 21st century. A dictionary defines the word as (1) uncle and (2) an unfamiliar gentleman, but it needs (3) a middle-aged man who sounds and smells a certain way, often demonstrating pathetically macho behavior. Korea seems to be a favored habitat of this tribe.
Look around, and it’s not so hard to find middle-aged men who give off rather unpleasant odors after numerous rounds of boilermakers.
They cough and spit a lot, due to constant, heavy smoking, and the sounds accompanying these activities too often rise above an endurable decibel level.
I know I sound very mean here, but I have been putting up with the habits of ajeossi for several decades now. One of those unbearable habits is the way they sit in the subway. They take up two seats worth of space by spreading their legs wide as if they owned the subway car.
Also, many of them are instilled with a Confucianistic, male-oriented way of thinking, which is another turnoff.
They feel comfortable with birds of a feather, so their instinct tells them to keep their tribe intact.
Likewise, they show little tolerance for different tribes, such as single women who choose not to marry even after entering their 30s.
I find that many of my good guy friends are showing early symptoms of “ajeossification,” so I launched an anti-ajeossification campaign with my girlfriends.
The campaign so far is not very successful, as I have observed my friends fast giving in. They give me excuses like ajeossification is a convenient way to survive in the tough world of work, with their ajeossi bosses.
I pondered for a moment, and agreed that the tribe of ajeossi deserves pity and sympathy.
My guy friends urged me to watch “The Age of Good Fellas,” a segment of “Happy Sunday” at 6 p.m. Sundays on KBS-TV.
After doing so, I found myself feeling a touch of pity for the tribe.
“Good Fellas” is a variety show that features five middle-aged celebrities. They play games using the ranks of a company, from president to executive director to director to assistant director to regular employee.
When they lose, they are deprived of their title and fall down to the lowest rank. The punishment that goes along with this fall is getting slapped on the wrist, and players have to beg to have the intensity of the slapping lowered.
They decide what the rankings will be at the beginning of the day through arm wrestling, and the president is flattered by a series of lower-rank men.
On a recent show, the ajeossi characters had to say things like “I have a huge amount of respect for you,” to the guy playing the president.
The show is technically in the category of entertainment, but I was thinking that it may well be a miniature of what the ajeossi tribe has to go through every single day.
Indeed, most of the ajeossi are in a position at work where they must flatter their bosses and deride their juniors, and, well, the cost in many cases is the self-esteem of all those involved.
Although many middle-aged men are not sensitive enough to realize the changes that are taking place within them, to many, this is quite a tiresome way of life, and they lose the energy to age gracefully.
They somehow quit caring about the way they look and sound, so they simply give up and become ajeossified. At this point, I guess I cannot blindly blame the ajeossi tribe, although this does not mean that I will sign an armistice with them.
I don’t think it’s too much to ask for people to close their legs on the subway.