Police have begun looking into complaints by pop music fans who claim they were tricked into buying fake concert tickets that were out for “resale” on Web sites.
Many of those who bought the fraudulent tickets for up to 90,000 won ($96) were teenagers eager to scoop up Asia Tour concert tickets in time to see their favorite five-boy band, TVXQ at Olympic Park in Seoul.
“There are over 150 people who are victims of ticket fraud so far,” said an Internet user who described himself as a “big fan of TVXQ” on the band’s official Web site. “That’s over 11 million won.”
Meanwhile, fans who were able to go to the concert on Feb. 23 were just as angry because it was hours before they could go home after the concert ended at 10:30 p.m. Concert organizers prohibited all cell phones and digital cameras inside the concert hall and collected them at the door.
But when it was time to return the devices, the check room became chaotic when fans crowded in all at once. The riot continued until 4 a.m.
Worried parents showed up at the concert because they were not able to contact their children.

LUCK FINDS SEOMOON TAK FOR A SECOND TIME IN JAPAN
Rock singer Seomoon Tak is in Japan to appear in a musical from Broadway.
She has been cast by producers in “The Who’s Tommy,” which will be staged later this month.
Tak will play the gypsy, “Acid Queen,” the role singer Tina Turner played in the original musical, based on the 1975 film “Tommy.”
The Acid Queen’s songs go two octaves higher than the average female voice, and producers were having a hard time finding the right person, Tak said in an interview.
“They liked my voice in my previous performance in ‘Hedwig,’” she said.
She added that this is the second time luck has found her since she went to Japan to study the language putting show business on the back burner.
Local producers needed a Korean rock singer for the original soundtrack of “Volcano High,” and Tak was there at just the right time.
Tak has recently released her sixth album, “Leap of Truth,” featuring the powerful “Goodbye to Love.”
In 2002, she participated in the Red Devils Cheer, a Korean football team support album for the 2002 Korea-Japan World Cup. 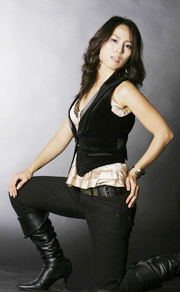