Cameras with many features crowd an expanding market

Cameras with many features crowd an expanding market 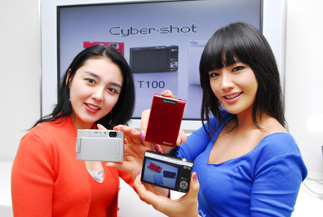 The digital camera market has been divided into SLR (single-lens reflex cameras that permit a change of lenses) and non-SLR cameras, but that doesn’t mean non-SLR cameras don’t have functions that mimic their more grown-up cousins. In fact, functions are improving all the time. While digital products in the past used to focus on design or technology, makers are now able to produce devices that have plenty of both.
Last week Sony Korea released an 8.1 mega pixel digital camera called the Cyber-shot DSC-T100. This camera comes with a state-of-the-art image-processing engine called “Bionz,” a technology that is used in Sony’s DSLR (digital SLR) models. The camera, although much smaller than DSLRs, has functions that make it very similar to a DSLR, including automatic exposure and brightness, which is a first for the Cyber-shot series. This means that photographs will not turn out too dark, even when the sun is shining the “wrong” way, and the camera will automatically increase exposure in shadowy situations. Another cool “DSLR-like” feature is its filtering, which allows the user to select a setting that, for example, makes it seem like the camera has a fish-eye lens.
The Sony Cyber-shot DSC-T100 reflects a new trend where both analog and digital features are being packed into small, compact digital cameras. In a sense, DSLRs are going the opposite way ― the DSLR scene is actually moving back towards traditionally photography, where each lens has its own feature. But not everyone has the money to invest in a DSLR and with digital photography so widely practiced in areas like the Internet, users have developed a sharper eye. Therefore compact digital cameras are packing in more functions. 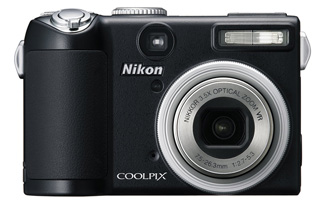 Nikon Imaging Korea’s latest release here is the Coolpix P5000, which comes with 10 megapixels, a Nikkor lens, and a 3.5x optical zoom feature.
Traditionally thought to be weak with portraits, Nikon has tried to compensate for this with a face-recognition program that recognizes and focuses on human features. Although not a DSLR, the Coolpix P5000 can support a telephoto, wide-angle lens converter.
Not to be outdone, last week Canon Korea Consumer Imaging unveiled a 7.1 megapixel digital camera, the Powershot TX1, which has strong high-definition video-filming functions. Canon has strengthened its zooming functions and popped in a powerful image processing engine called the Digic III. Videos can be taken at 1280 x 720 resolution at 30 frames per second, and it comes with built-in zoom and anti-shaking functions, making it perfect for filming short clips.