[DVD Review]A good film is all about the details

[DVD Review]A good film is all about the details 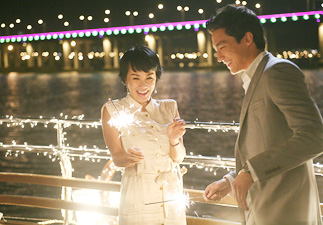 “Seducing Mr. Perfect” could have been a fine and stylish romantic comedy for fans of Daniel Henney, if it hadn’t made the mistake of trying too hard to manufacture a climax.
Towards its finale, “Seducing Mr. Perfect” shifts from being a cool corporate romance into a lukewarm drama about the secret life of Robyn Hadyn, played by Mr. Henney. However, the transition is rough and the story falls flat.
Perhaps it’s a common mistake for directors to be bound by the formal conventions of filmmaking. Or maybe their need to set up a climax is due to a sense of guilt about having made a film that was too “arty” up to that point.
The film features a romance between Min-jun, a fashionable consultant at a global financial firm, and her handsome boss Robin, an M&A specialist with a degree from Harvard, who has just arrived from Hong Kong.
Using bold strokes, the story follows the conventional script of a romance novel, as if to make clear that the film is out to satisfy the fantasy of love with a perfect man ― i.e. a successful investment banker ― that is supposed to fill the minds of all urban young women.
The film partly succeeds in this ambition. Mainly because it has Henney, the ultimate heartthrob, who has a humble, loving persona and who, in his loosened tie and unbuttoned shirt, can produce deep sighs from a theater full of women.
Even so, the film fails because it does not pay attention to detail.
Hadyn speaks five languages but does so too clumsily and that’s just one way in which the film becomes unbelievable. There is no emotional tension when Min-jun’s photographer boyfriend dumps her for a younger woman. Apparently that younger woman is a bimbo and a selfish ingrate compared to her the photographer’s considerate ex-girlfriend. Min-jun and Robin meet through a car accident. They walk away from their cars to say the most predictable lines one could possibly imagine. And the language the couple use as they move from hating each other to gradually being able to read each other’s mind shows no substantial development. All their phrases are very bland.
The film wants to draw a general portrait of love in a cosmopolitan city. And to complete the urban fantasy the film is drenched with scenes that have been attenuated with computer graphics. The night skyscrapers of Hong Kong appear outside an office space in Seoul. The entire film, including a ferry ride on the Han River, does not seem like it was shot in Korea.
Perhaps the film’s catchphrase “a global romantic project” sums up the film’s ambition. It certainly jumps around enough ― from Korean to English, from hotel rooms to the streets, from Hong Kong to Seoul, all with actors of various races.
Perhaps the film would have been better if it had paid more attention to reality. For example it seems unlikely that a global financial firm would encourage a boss and his assistant to sit in a hotel bar a day after they met to talk about love. The lesson this film teaches is that a movie cannot be saved by the skill of its actors, however good they are.