Beneath the shadow of prejudice

Beneath the shadow of prejudice 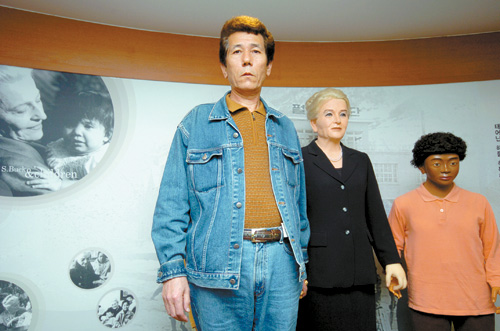 Kim Bu-won standing next to the wax-figure of Pearl S. Buck at the Nobel Prize winner’s memorial hall in Bucheon, Gyeonggi province. Mr. Kim says Ms. Buck was a mother to every mixed race child in this country. By Lee Ho-jeong

Kim Bu-won, the manager of the Pearl S. Buck International Memorial Hall in Bucheon, Gyeonggi province, doesn’t smile very often. He has often felt that smiling was a luxury reserved for other men.
Mr. Kim was born on Oct. 29, 1947. The Japanese occupation had ended two years previously and the country was racially homogeneous. For a woman to have a child of mixed race was considered the worst form of disgrace. Mr. Kim was one such child.
Mr. Kim is the son of a U.S. military officer and a Korean woman. “I never knew my father,” Mr. Kim said. “I don’t even know his name.” All he knows is that his father once worked for the Korean Military Advisory Group.
“My mother took her secret to her grave, “ said Mr. Kim. “She never told me who my father was. If I had known I might have tried to find him.”
Mr. Kim’s mother and father met while she was working at a textile manufacturing plant. They were introduced by a friend of his mother, who worked as a typist at the U.S. base. 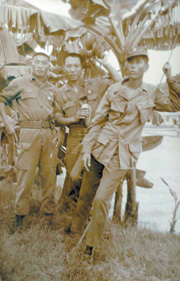 Kim Bu-won with Korean soldiers in Vietnam. Mr. Kim volunteered to go to Vietnam and became a weapons inspection officer.

“My mother had been previously married and she already had three daughters before she met my father,” Mr. Kim said. “But her first husband was killed. He went to Japan to study and shortly after he returned he was attacked by fellow Koreans and shot to death because they thought he was pro-Japanese.”
Mr. Kim said his mother used to meet his father at the U.S. base, then they moved in together. Shortly after, his father was posted back to the U.S., whereas his mother was left to give birth to him.
“She tried to have an abortion,” Mr. Kim said. “Having a child with different colored skin was considered disgraceful.”
The predicament of Mr. Kim’s mother was made more severe because her father was a wealthy and respected Korean who lived in the same neighborhood and ran a shop that sold curtains. For a man of his status, having a daughter who gave birth to the child of a white foreigner meant condemnation.
“There were no abortion facilities at that time so she tried to get rid off me the only way she knew,” he said. “She had heard that drinking aged soy sauce and throwing herself downhill would kill the baby.”
Mr. Kim’s mother tried out the technique in a nearby graveyard but, despite her efforts, he was born 7 months later, in Busan. Mr. Kim said his mother was so ashamed that she spread the rumor that he was the offspring of her typist friend, who already had a mixed-race son. She told people she was raising him as an act of kindness.
But lies don’t last and people soon realized that Mr. Kim was his mother’s child. 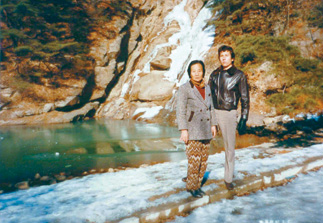 Mr. Kim with his mother after completing his service in the army. Provided by Kim Bu-won

“My mother was ostracized by her own family,” Mr. Kim said. “My grandfather refused to see her after I was born. He died without speaking to her again and she was not even allowed to attend his funeral.”
Fortunately Mr. Kim’s grandmother was less harsh.“She liked me,” Mr. Kim said. “I had three older sisters but she loved me the most.”
It was his grandmother who helped his mother to make a living. She gave her money to start a business. “My mother opened up a small shop that sold pots.”
Mr. Kim said being bullied by other children was small potatoes. “What really hurt were the things that adults would say,” he recalled. “They never tried to understand. I remember the first day I went to elementary school. We were all wearing handkerchiefs with our names written on them. A kid of my age was standing next to me and his mother pushed him away. And this I remember very clearly. She told her son ‘Don’t play with this child because he has bad blood.’ I was very hurt.”
Because of his color Mr. Kim was constantly discriminated against and harassed, not only by his peers but also by his teachers.
“In sixth grade I remember an English teacher slapped me really hard with his slippers several times, for no apparent reason.”
Mr. Kim said he never wanted to go to school. It was just too harsh. “If it weren’t for my uncle, who had money and power, I would not have gotten beyond elementary school.”
To enter middle school Mr. Kim needed to be adopted by his uncle, because of Korea’s unique family system. He needed to be listed under his uncle’s family name, because his own father did not exist under Korean law. In elementary school he used his mother’s first husband’s family name, which was Cho. But since Mr. Cho was not his actual father, the authorities would not allow him to use the name. So he was adopted by his uncle, who already had six children.
He went to school from his uncle’s house. “My uncle was a great man and he took me under his wing as if I was his own. His wife, however, was different. She would discriminate against me and make me do awful chores, even though they had domestic staff in their house. She was just mean and really hated me.”

One day Mr. Kim felt he could no longer take the hatred of his aunt, so he ran away. He was only 17. “I was friends with the son of my mother’s typist friend. He told me about the Pearl S. Buck’s Opportunity Center in Sosa, Gyeonggi province.” The welfare facility, which was opened in 1967, accepted children of foreign fathers or mothers and Korean orphans.
Mr. Kim lived in the facility for several years, waiting to be shipped to America along with 200 other children who were in the same situation. “I really wanted to go even though, back then, many Koreans were afraid of moving to America. But for people like me, because of our skin, we didn’t have to worry. All we needed was an ability to speak the language.”
While Mr. Kim was waiting his turn to travel to the U.S. an unfortunate incident occurred.
“I was attending an English institute in Jongno when it happened,” Mr. Kim said. “It was a hot summer night and I remember seeing several guards, who were taekwondo masters, and a younger boy, who was half black. They were talking outside. I was just too tired so I went to my room to catch some sleep.”
Mr. Kim said that before the incident the guards and the residents at the Opportunity Center were close friends. But that night the black boy was drinking alcohol and the guards had ordered him to go back to his room. An argument broke out and a few punches were exchanged.
“I should have known better but another boy barged into my room and told me that the guards had killed the boy,” said Mr. Kim. “The fact was he was just knocked out cold. But being young and irrational I rushed out with a bat and chased after the guard. We even went to his house and broke down the door. Even a taekwondo master would be afraid of a person chasing after him with a weapon in his hand. We roamed the streets for hours. The next day a news report said that a gang of young boys had attempted murder and for that reason I was locked up in jail in Incheon for a month.”
Because of this incident his chance of going to the U.S. had been jeopardized. The surest way for him to go to the U.S. was to serve in the military, which he agreed. to do “To hurry things up I became a member of the Korea Augmentation Troops, which was the closest I could get to actually joining the U.S. military,” Mr. Kim said. He was trained in Daegu and later taken to the U.S. base in Yongsan.
“The American soldiers thought I was weird since I looked white but I was wearing a Korean uniform,” Mr. Kim said. “They were pretty confused and so was I. I started to think about who I really was and I frequently questioned if I was a Korean or an American.”
One day he decided he could no longer take the frustration and confusion and decided to volunteer for Vietnam.
“At the time, the Korean Augmentation Troops attached to the U.S. Army were not allowed to be sent to Vietnam. So I quit and joined the Korean military. I wanted to leave everything behind and just go to a place where I would not have to think about my skin color.”
However, all he did was to stand guard in the demilitarized zone where the weather was cold and the facility was outdated. He went AWOL from the military and began heading toward Seoul but he was arrested by the military police at a train station in Cheongpyeong. After spending a month in a military jail he was sent before a two-star general, who asked why he had tried to desert. Mr. Kim told the general that all he wanted to do was to go to Vietnam. The general gave him his wish. He was sent to Vietnam and ended his three-year service there.
After he returned to Seoul, Mr. Kim started to operate a chicken farm, still waiting to be shipped to the U.S. Even though times had changed, people’s perspective had not. “Although I was born and raised in this country the people here never saw me as one of their own,” Mr. Kim said. “After I was discharged I went to a bar near Seoul station and the bartender treated me like a foreign student who was fluent in Korean. I tried to tell them I was a Korean of mixed race but he would not believe me. This happened to me many times.”
Since then he has worked for construction companies, including Dongbu. Between 1982 and 1983 he was the chairman of an association for mixed children.
He married a Korean woman soon after he was discharged from the military and now has two children of his own. His older son is currently serving in the military and will be returning to college, where he was majoring in information technology. His daughter currently works for Samsung Life Insurance.
“My children have never gone through what I suffered,” Mr. Kim said. “Today children of mixed blood are not treated like I was. But there’s still a long way to go.”
Mr. Kim is a great admirer of Pearl S. Buck, the American novelist who won the Nobel Prize for her novel “The Good Earth” and founded the first international, interracial adoption agency.
“The reason I work at the Pearl S. Buck Memorial Hall is because they help children like me. The Korean government has ignored the issue for too long. ”