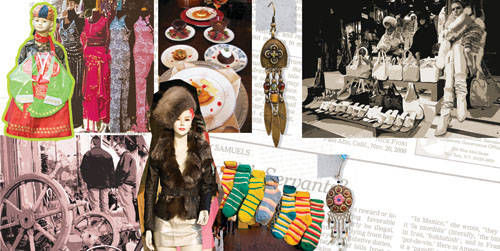 Thirteen years ago, the streets of Itaewon seemed foreign. There were signs in English, merchants soliciting American soldiers and nightclubs with neon signs that flashed incessantly. However, Itaewon has changed drastically in recent times. Visitors can buy trendy clothes, taste ethnic cuisines representing many cultures and buy antiques and used books. Here in Itaewon-dong, Yongsan district, the past and the present overlap and Korea mingles with the world.
On a recent weekend, the streets of Itaewon were full of energy. Women wearing shorts and long leather boots or tight jeans and high heels strode down the streets and crowded into restaurants serving brunch. The Itaewon market, where the fashion stores are concentrated, was full of women in their 20s, 30s or 40s. “Weekend customers have almost tripled recently,” said Chae Hye-seon, who owns a shoe shop here.
To many Koreans, Itaewon is synonymous with transformation, but the place bears the name because it had so many pear trees. Itaewon can be translated as “the peaceful place of pears.” The area has witnessed many aspects of Korea’s turbulent modern history. In the early 1900s there was a shooting range for Japanese soldiers here, and it became a nightlife center when American military bases were set up in the Yongsan district. In this century, Itaewon has changed itself again. One by one, interesting restaurants have opened in the back streets behind the Hamilton Hotel, and clothing shops that used to sell imitations transformed themselves into trendy fashion stores. And now domestic visitors outnumber foreigners.
“It all began a year ago. Different types of people began patronizing Itaewon. Well-dressed television broadcasters or employees of foreign companies started coming,” said Lee Dong-oh, an official of the Itaewon Special Tourist Zone.
Those who patronize Itaewon are diverse in ages and tastes. Kim Young-ho, 42, a businessman, frequents a bar in Itaewon with his college friends. Mr. Kim is very positive about the neighborhood. “It is located in the middle of northern and southern Seoul,” he said. “The atmosphere is unique because there are a lot of foreigners.”
Lee Seong-jin, a 57-year-old housewife, comes to Itaewon for the shopping. “I can buy clothes similar to those made by luxury brands for lower prices,” she said. “It is also fun to shop for antiques too.”
Most of those wandering around Itaewon are professionals in their 30s. Choi Seo-yeon, a 30-year-old officer worker, said, “Itaewon reminds of previous trips to overseas. I can find fashionable clothes like party dresses.”
“The food is not as expensive as in the restaurants of Cheongdam-dong, southern Seoul, said Ahn Ju-yeon, a 34-year-old bank employee. “I can keep up with the trends, and I feel comfortable here.”
“The growing popularity of Itaewon means that there are more people embracing different cultures,” said a popculture columnist.

In the old days, people came here to buy imitations of luxury brands, but not anymore. These days, Itaewon is a prime destination for many trendsetters. “Those who sell imitations can’t survive because of police crackdowns,” said Jeon Hae-ran, a proprietor in the Itaewon market. “The yen and the dollar have fallen so there are fewer foreigners. Merchants have to deal with domestic shoppers.”
The merchants had to differentiate themselves from other shopping areas to attract trendy consumers. So they began selling import brands that have small defects or are made of leftover fabrics. They are priced at one tenth of the original. “There are many dresses I can’t find in Dongdaemun or near Ewha Womans University. I come here once a month to buy clothes that are similar to luxury brand items,” said Shim Ji-young, a 32-year-old employee.
The heart of the neighborhood’s shopping district is the Itaewon market and stores nearby. In the market, stores on the first floor and in the basement sell female attire and accessories. In the surrounding neighborhood, there are stores that sell oversized clothes or tailored shirts and suits.

O ne of Itaewon’s less well known assets is a street that is lined with antique shops. “It was not easy to import antique furniture in the early 1980s,” said Han Sang-hwa, 68, the owner of the Daewon Antique store. “Instead I bought used furniture from foreigners living in Hannam-dong or Itaewon-dong. In the beginning, there was not enough supply and the prices were high.”
As importing antique furniture became easier in the 1990s, 20 to 30 antique shops sprung up. These stores acted as wholesalers of antiques to antique shops throughout the country. The “antique street” was formed after the financial crisis (1997-1998). There are over 100 antique stores south of the Hamilton Hotel and the strip of curiosity shops continues to Banpo street.
They mostly sell what they claim are authentic European-style antiques including sofas, beds and dining tables.
“Most antique shop owners purchase antiques from overseas or import them through middlemen. There are not many fake Chinese-made antiques,” said Kim Jin-seok, 58, the owner of Namgyeong Furniture.
The prices of antique pieces range from a few hundred thousand won to millions of won. Still, Itaewon’s products tend to be cheaper than those sold in Nonhyeon-dong or Sinsa-dong in southern Seoul.
The antique district also has stores that sell interior decorations from China or Tibet and there are an increasing number of young buyers. “In the past, most of the customers were in their 50s, but now there are couples in their 30s. There are many visitors who take photographs or enjoy the atmosphere,” said Yun Hye-seong, 44, the owner of Yun’s Antique.
“Before, sofas and dining tables were popular, but these days, dressers and consoles are the rage for young shoppers,” Mr. Han said. One drawback is that most stores do not have parking lots and are closed on Sundays.

“Dining in Itaewon is comfortable. There is a sense of freedom,” said Park Geum-hee, the marketing chief of Dawon ID&C, an interior design company.
On holidays, she dresses casually and has brunch in Itaewon. She dines with her friends or eats alone. Sometimes she has a bowl of salad, if she’s dieting, or orders a sandwich. During weekdays, she goes to Itaewon for formal dinners with foreign customers. “Foreign customers prefer the casual atmosphere of Itaewon to fancy restaurants in southern Seoul,” she said.
Itaewon is also good for dining in groups. There is a wide variety of food from American or Japanese style-bars to Vietnamese noodles. There are always good places for different occasions. “After all, the price is what is most attractive about Itaewon. It is more cost-efficient than southern Seoul,” she said.
Ms. Park says she likes too many places in Itaewon to recommend just one.

Restaurants
·La Cigale Montmartre
This French-style open cafe features red walls and a stylish atmosphere. Its specialties include Brussels-style mussels in white wine with onions and celery (11,000 won). 02-796-1244
·Le Saint Ex
Le Saint Ex could be a restaurant in the French countryside. The menu changes regularly. An appetizer of oysters with white wine sherbet costs 8,000 won; glasses of house wine start from 6,000 won. A lunch set of sea bream cooked with tomato sauce, carrot soup and a dessert costs 15,000 won. 02-795-2465
·The Bungalow
Entering through the red door of the Bungalow takes you into a sand-covered beach complete with lounge chairs and fancy cocktails. Barbecue is the main fare here, including beef shish kebabs from 14,000 won. Cocktails start from 6,000 won. 02-796-1606
·Nashville
The interior of Nashville looks like an American restaurant in 1970s. The price of a fresh-grilled hamburger and fries starts from 7,800 won. 02-798-1592
·Gecko’s Terrace
A hamburger starts at 8,500 won, Thai-style fried rice is 15,000 won and draft beer starts at 2,500 won. Pool is available. 02-749-9425
·Balbarine & Tensho
Korean-style pub Balbarine and Japanese-style bar Tensho cross over in the middle. They specialize in Balbari soup (a soup with kimchi-filled dumplings) at 18,000 won. 02-749-2224
·Japanese Noodles Ramen (81 Beonok)
As you may have guessed, Japanese-style ramen (noodles) is the main fare. A variety of noodles including shoyu (soy sauce) ramen and miso (bean paste) ramen, which start from 6,000 won are available. The restaurant is closed between 2 p.m. and 5 p.m. 02-792-2233
·Toque
Toque has a world of sandwiches named after different cities: Tokyo, Havana and New York are all represented. The Tokyo sandwich features crab meat, horseradish and mayonnaise. The weekend brunch bar is 15,000 won. Individual brunches are also recommended.
02-794-3834
·Kkangtong Mandu (dumpling)
A plate of six dumplings is 5,000 won. Ground bean curd soup is 5,000 won. In the summer, kong guksu (bean noodles) is popular.
02-794-4243