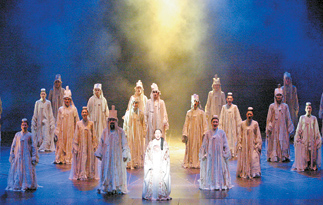 A scene from “The Last Empress” which has now been seen by 1 million people worldwide. [JoongAng Ilbo]

March 1st, 2007 was a historic day for those involved with the famed Korean musical “The Last Empress.” It was when the show’s total audience exceeded 1 million.
The musical delves into a tragic moment of modern Korean history when the last empress of the Joseon Dynasty, Queen Min, the wife of King Kojong, was assassinated by Japanese conspirators during the colonial occupation. It has been the most successful production of all the original musicals made in Korea.
The musical has now been staged at home and abroad. It was ironic that the same day the musical broke the 1 million barrier was Independence Day in Korea (also known as the March First Movement Day), which commemorates the moment when many thousands of Koreans held demonstrations as a sign of resistance to Japanese colonialism. The music critics say there are four main reasons for the production’s success.
Endurance is one reason.
When “The Last Empress” was staged for the first time in 1995 it was considered a blockbuster project. Almost 1.2 billion won had been invested in the production. Things, however, didn’t go as planned. The musical was originally scheduled to open on Oct. 8th, to mark the day when Queen Min was murdered, but it was cancelled, because the producers could not secure their budget.
For a month and half Yun Ho-jin, a producer at Acom International, the company that organized the show, tried to get sponsors to fund the production.
“It was really random,” he recalls, “but we didn’t have many options.”
In 1998, when the musical was staged at the Lincoln Center, they faced another obstacle. The theater staff asked the Korean producer to pay extra money, because the stage set brought from Korea was too big to fit the American theater. Thirty-six nervous hours passed before the Korean personnel could convince the American crew to work.
Others cite nationalism as a key reason for success.
For years Queen Min was mostly known only as the wife of King Gojong. She had the image of being an arrogant woman who often fooled her father in-law and challenged the royal authority; that is until the release of Yi Mun-yeol’s sympathetic novel “Fox Hunting,” upon which the musical is based.
“Some would say the whole story is overloaded with nationalism,” says Song Gyeong-ok, the secretary of Acom International. “But through the musical we were able to look back with pride on our history.”
The spectacular nature of the musical, which features over 150 production staff and 45 actors, has been another asset. It’s by far the largest musical ever produced in Korea. The set has a rotating portion in the center. The producer spent 100 million won on costumes. A total of 600 items of clothing were made to revive the royal styles of the Joseon Dynasty, all of them tailor-made. Lighting, which changes three or four times a minute, was another factor. The changes in the stage lighting to dark red after the empress dies while the song “Rise the People”plays, followed by stabs of blue lightening from above received praise from critics all over the world. In 1999 “The Last Empress” was nominated for the LA Stage Alliance Ovation Award.
“It seems the spirit of Queen Min is deeply embedded in the musical, given that the production had overcome many serious obstacles during the past 12 years,” says Mr.Yun.