Cuban great plays on after 50 years of jazz

Cuban great plays on after 50 years of jazz 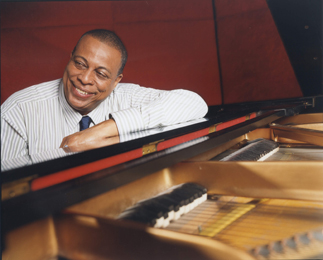 A Cuban jazz musician, Chucho Valdes was once described by The New York Times as the dean of Afro-Cuban jazz, a type of Latin jazz. Critics wrote that the five-time Grammy winner left audiences spellbound with his technique, power, speed and clarity. The Chucho Valdes Piano Quartet is performing for the second time in Korea on Thursday at Seoul Arts Center.
Standing 6-foot-6, Valdes is one of the most prominent figures in Cuban music. The son of the noted musician and composer Bebo Valdes, musical director of the Havana-based Tropicana casino, Chucho Valdes was born in 1941 in Havana. By the time he was 16, he was leading his own group. In 1960, his father defected from Cuba but Chucho stayed behind.
Chucho Valdes never defected nor tried to get around the trade embargo by the United States. His music, however, flew over it and won Grammy awards. In 1967, he formed the Orquesta Cubana de Musica Moderna. In 1973, he formed Irakere, the legendary Cuban jazz orchestra, with Arturo Sandoval and Paquito D’Rivera, and the Cuban rhythms captured American jazz fans. In 1978, the trio’s album won a Grammy award.
Chucho Valdes officially debuted in the United States in 1991 by releasing “Solo Piano.” He performed with Roy Hargrove in 1996 at the Havana Jazz Festival, the same year that Valdes became the president of the festival’s organizing committee. Despite the belated debut, he gained enormous popularity in the United States. In 1999, his live concert at Village Vanguard, a jazz club in New York that stages famous jazz musicians, had sold out shows. The subsequent fourth album, “Live at the Village Vanguard,” won another Grammy in 2001.
Chucho Valdes has played in more than 50 countries, and performed with some of the greatest jazz and pop musicians of our time, such as Herbie Hancock, Dizzy Gillespie, George Benson, Michel Legrand, Carlos Santana, Chick Corea, Taj Mahal and the Marsalis brothers.
Chucho Valdes is going to perform with drummer Juan Rojas Castro, bassist Lazaro Rivero Alarcon and percussionist Yaroldy Abreu Robles.