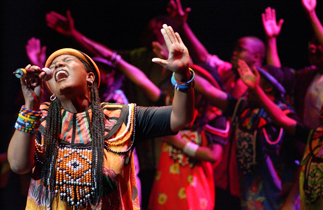 Remember “The Lion Sleeps Tonight” from the soundtrack of “The Lion King?” If you say yes, do you also remember who wrote and sang it first?
The first question might be easier than the second for many. The 1994 hit single was actually a song by South African musician Solomon Linda and his group the Evening Birds in 1939. The song went through many evolutions, being covered by folk songwriter Pete Seeger in the 1950s.
With just a few exceptions, including Ladysmith Black Mambazo, the music of South Africa was a relatively untapped field (except in Paul Simon’s “Graceland” in which he introduced South African music through collaborations with Hugh Masekela, Miriam Makeba and Ladysmith) until a few years ago, when artists like Nomvula and the Soweto Gospel Choir started to take charge of the world music scene one album and one humanitarian cause at a time.
One of this new breed of world music groups, the Soweto Gospel Choir, is coming to the LG Arts Center in Yeoksam-dong, southern Seoul on March 28.
Formed in 2002, the Soweto Gospel Choir, with 30-some members from all over South Africa, has garnered a lot of attention as the ambassadors for Nelson Mandela’s AIDS foundation, as well as their own charity foundation ― Nkosi’s Haven/Vugani, which helps orphans affected by AIDS.
They’ve met with success since their formation, with their debut album “Voices from Heaven” being the number one hit on the Billboard world music chart in 2005. Their second effort, “Blessed,” won the Best Traditional World Music award at the 49th Grammy Awards.
This concert in Seoul will feature songs, mostly from their Grammy-winning second album, including “Nkosi Sikele’l Afrika” (South African National Anthem), “Joko Yahao” and “I Bid You Goodnight.” The choir will also sing familiar songs such as “Amazing Grace” and “The Lion Sleeps Tonight.”