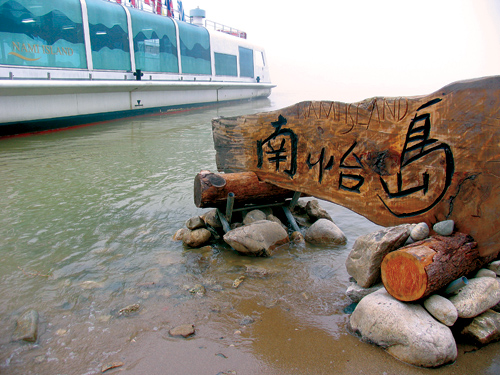 It was my third visit to Nami Island. The first time I was in my baby stroller. My father had brought me and the rest of the family to an annual office picnic his co-workers had decided to have at a popular,woody lot on Nami in 1980.
The second time was 18 years later. I was scampering out of a boat hollering, “Last one off is doing the dishes!” I was with a bunch of college buddies who thought Nami was the coolest place for a boisterous campout and, back then, there were many others who thought the same thing.
The third time was just last week. It was rather quiet and calm and I had an umbrella in one hand for protection against a slow drizzle. The frat house atmosphere had been transformed into something more like an Ingmar Bergman film.
Instead of the old taverns and liquor stores with their gaudy-colored canopies that used to greet passengers disembarking from the ferry boat, the dock was surprisingly clean and empty. It was all but newly painted with an entrance leading to a luxuriant Sequoia forest.
“Welcome to Naminara Republic,” said Lee Kang-su, a promoter for Nami Island Inc., who was smiling broadly under his umbrella. “It’s not the same island it used to be, is it?”
Mr. Lee, a former visual image marketeer for hallyu actor Won Bin, has been working with the island company for about two months. He helped create Won Bin’s image as a clean-cut and fashionable city boy, which put the entertainer on the top of the Asian heartthrob list.
Mr. Lee’s new job is to help discard the island’s old image of rowdy campfire parties and promote its new look as a natural, environmentally-friendly place with Sequoias and lily ponds.
“I am still wondering how I can reach my goals because the traditional image is so strong,” he said, accompanying me for a tour around the island. “But the island has been going through many changes and so many people are now involved in the job of making it beautiful. It’s entire appearance is changing.”
Thirty percent of Nami Island’s employees are over 60 years old, in line with the company’s belief that “older people are more likely to be caring.”
A man who looked like he was well into his mid-60s bicycled past us wearing a raincoat. As he waved, Mr. Lee explained that he was one of the in-house artists who live on the island. There are also gardeners and chefs who came here after their retirement in the city, and a 72-year- old ferry boat captain.
Choi Jun-seo, an assistant manager of Jeong Gwan Ru, the new lodging facility the island company opened last week, was one of the older staff members. He retired as a manager at the Jeju Hyatt last year, but he applied for an assistant spot here so he can still work and wear his best tuxedos.
“We have 40 wonderful rooms decorated with different themes and a magnificent view over the river,” Mr. Choi said, introducing his new hotel, which was built over the old motel that KBS used as their base camp when filming “Winter Sonata.”
Lee Wook-jae, 55, who used to work for Wooryong Construction but is now in charge of all hanok housing on the island, said everyone on Nami has to take part in recycling before they can start thinking of making something.
“On this island every structure ― and even the people ― have a story to tell because they have come a long way to get here,” he said.