The Prospero of Nami Island

The Prospero of Nami Island 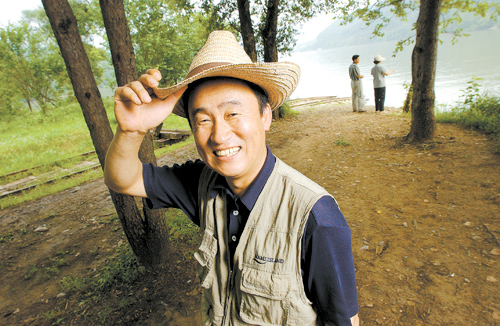 CHUNCHEON, Gangwon ― This is not a story about a magician, although it would be easy to think it is after stepping onto the island where Kang Woo-hyon has been casting spells for the past six years.
In Shakespeare’s play “The Tempest,” the sorcerer Prospero rescues the spirit Ariel, who has been imprisoned in a tree. Like Prospero, Mr. Kang has been releasing the spirit of Nami Island, and his approach is radical. For example, when Korea has winter, he has summer and vice versa.
“Why would I want to do something that someone else has done?” he said, putting another cigarette between his lips. He lit it, inhaled and then continued, “Everything was my idea. If it gets boring, I’ll change it before someone copies it.”
This was his answer to the question of whether he had any role model in mind before he decided to transform a scrubby island on the Bukhan River, ninety minutes from Seoul, into a green wonderland that attracts thousands of visitors every day. Half of of them are foreigners, a record that makes many regional governments green with envy.
In summer, Mr. Kang creates artificial snow and icicles and decorates Sequoia trees with Christmas ornaments to fascinate tourists from warmer Southeast Asian countries.
In winter, his island is covered with beach parasols and people come to participate in (or watch) a bikini show. Before the island underwent its drastic change, it was a peaceful spot where rabbits, squirrels and deer ran freely across its 400,000 square meters. They have now been joined by four ostriches, another of Mr. Kang’s offbeat ideas. Visitors may now spot the shivering African birds warming themselves around a fire against a winter backdrop.
Mr. Kang, 55, is the president of Nami Island Inc., a company he took over in 2001 when he was working as a children’s book author, graphic designer and illustrator. The island, 63 kilometers (40 miles) away from Seoul and 8 minutes by ferry from the inland dock, used to be one of his favorite places to visit with his two sons. He would go there to to get inspiration for his next work ― except he felt the place was getting uglier every time he visited. By chance, he met the owner of the island. He complained to him that the beautiful spot was turning into a venue for noisy beer parties thrown by nuisances from the city. The owner told him that if he cared about the place so much, he could manage it. Mr. Kang accepted the challenge but insisted on one condition.
He suggested that the owner pay him 100 won (10 cents) a month until he brought the island back into the black. Up to that point the estate had been managed by a small firm and the island was $6.3 million in debt. Mr Kang further stipulated that, once he had saved the island from bankruptcy, he would get half of any subsequent profits. The owner said, “Why not.”
A local paper scoffed at the deal, saying that “a rich man” had let a “weird artist” take over his land. 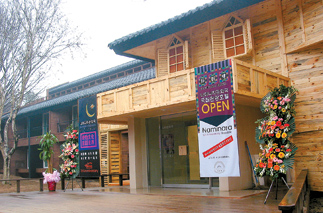 The new lodging center on Nami was once home to the “Winter Sonata” crew.

At the time, Mr. Kang. had been invited to teach industrial design at Hanyang University after he designed the official poster for the 51st Cannes Film Festival. He abandoned this plan and began working on his island. First he pulled down all the utility poles that blocked the view. He closed down the liquor and grocery stores that were charging twice the price in an average convenience store. He shut down shady taverns, a nightclub and anything in concrete. The residents who ran the shops went berserk. Thugs from a nearby town threatened to drown him in the river if he did not stop.
But he was determined, despite considerable harassment. When he dug a foundation to build a bungalow, garbage showed up on the site (and he ended up paying a fine for dumping). When he tried to install artwork along the riverbank another pile of trash showed up (and he paid another fine).
“I was fined five times for something that I didn’t do,” he said, raising both his hands in the air.
He prohibited cooking and camping on the island. He turned off all the lights after 10 p.m. so that visitors could see the moon and stars more clearly. And he woke up at dawn to go around the island making small fires in designated spots. He wanted visitors arriving on the island early in the morning to see the mysterious aura of soft lavender smoke rising over the water.
He invited a KBS television crew and let them borrow the island for free to film the popular TV series “Winter Sonata,” in exchange for a free promotion of the transformed island.
His ideas did not end there. He “sold” each Sequoia tree for 99,000 won, in exchange for putting the buyer’s name on the tree. He installed an art gallery and named it Raison, like the Korean cigarette brand. He called up the tobacco company and asked, “I have here an art gallery with the same name as your cigarette brand. What are you going to do?” KT&G decided to pay for the maintenance of the gallery.
By the third year, his island company was earning “billions.” From 275,000 visitors in 2001, the island had 1.7 million in 2006. He recycled soju bottles that tourists had thrown away to create a glass wall that cuts through the island. Chandeliers that shine in his new lodge and ash trays that sit on every hand-carved wooden table were made by him and his artist friends. He bought damaged wood from Naksan Temple after the 2005 fire and built a new entrance to the dock.
“I am not even half done yet,” Mr. Kang said. “I try to put into action whatever I can think of. That way you can be original.”
But, what about those ostriches? Why are they running wild?
“I haven’t set them loose, I just didn’t lock them up in a cage,” he smirked. “See, you’re thinking like a boring person again.”