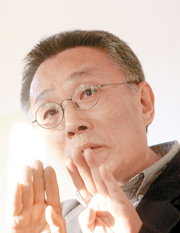 Hwang Seok-young took the stage in a loose suit at the Swedish ambassador’s residence this week to give a summary of his eventful literary life. His audience was a group of diplomats organized by Swedish ambassador Lars Vargo. The event was the latest in a series held by the Seoul Literary Society, a group of foreign ambassadors to Korea that was launched last year to study Korea’s literary scene. Their first speaker was Ko Eun, a poet who is regarded as a strong candidate to win the next Nobel Prize for literature.
Mr. Hwang, a prominent Korean novelist, is better known for his political history. He spent years in exile after he visited North Korea in 1989 at the invitation of the country’s Literature and Art Union. He was also imprisoned for five years for violating the National Security Law. The writer, 69, currently resides in Paris and is writing a serial novel for a Korean daily newspaper.
“In Korea we call a sudden attack of cold weather like today ‘ggotssaem cold,’ he said at the start of his lecture. “It means that winter is jealous of the coming spring. I think it’s the same in life. Sometimes barriers are needed to win fortunes.”
Mr. Hwang ran through a brief history of his youth, his expulsion from high school as a teenager, seeking refugee in a temple for a year as a Buddhist monk then going to the Vietnam War, which alerted the writer to critical issues of Korean history.
“Originally I wanted to write aesthetic novels with sensual phrases,” he recalls, citing his extensive reading of French and American novels during his youth. “But I went through so much in Vietnam. I witnessed atrocities. When I came back home the military government was carrying out a five year development plan and the memory that stays with me the most is of Chun Tae-il, a laborer in a garment factory who immolated himself as a protest. We call it the Chun Tae-il shock.”
In 1989 the author went to North Korea with an activist pastor Mun Ik-hwan. Neither had the government’s permission.
Afterwards he fled to Japan. But when the Japanese government refused to accept him as a political refugee, he relocated to China, where he witnessed the Tiananmen Square protest. He eventually settled in Germany and stayed there for four years, based on an agreement that he would not get involved in any political activity. There he witnessed the collapse of the Berlin Wall.
“I was the only Asian standing near the Berlin Wall that day,” he recalls. “While I saw people singing, hugging and sharing champagne with each other I couldn’t help but shed tears. There I had a beautiful transition as an individual.”
His latest series of novels draws on the concept of an ancient Korean myth to tell the story of a young girl from North Korea living in East London.
After the lecture there was a question posed to him about his unique position on the Korean literary scene, in which he manages to delve into the issues of tradition and cultural authenticity without falling into the trap of nationalism.
“I tend to separate nationalism from nationalist literature,” he said. “To a writer, your mother tongue is your country. If I were a painter it would have been a different issue, but as a writer it’s difficult not to fall into these problems. Whenever I give talks abroad I always say that I try to be an international citizen.”