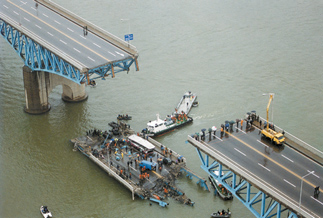 The collapse of the Seongsu Bridge killed 32 and embarrassed Korea.

From the tragic Korean War to the the Han River miracle, Korea has been an Asian tiger with a non-stop motor. That’s just recent history, of course.
So what does it mean to be Korean? What makes the nation tick? Is there an “X-factor” that defines Korea?
Answers to these questions will be complex and complicated and involve thousands of years of history, but at just 125-pages, “The 48 Keywords that Describe Korea” does a very good job. The handy little volume packs quite a punch with a great deal of useful and valuable information.
Despite a distracting number of proofreading errors, I think the book will be a valuable tool. It can be a resource for foreigners working in Korea for the long haul and for visitors who want a quick glimpse of current events, along with some historical background to put things into perspective.
In digging for the “X” factor ― for the essence of Korea ― authors Kim Jin-woo and Lee Nam-hoon researched the frequency of keywords appearing in the Korea media. The book then provides a two-page profile of the top 48 keywords in an attempt to define Korean society.
Why does the “X “ factor need a new definition?
According to the book, the rapid changes in Korea ― in industry, arts, sports and other fields ― are unfolding so fast that even Koreans can’t keep up. As Korea transforms into a new pluralist society, the consciousness of its people is also evolving. Therefore, Korean society needs new definitions, and the book attempts to at least outline a working framework for that elusive definition.
The appendix actually has the 480 keywords ranked in hierarchical order.
What’s No. 1? The Internet.
The rest of the Top 10: apartment houses, real estate, Samsung Electronics, reform, TV drama, human rights, digital, cellular phones and globalization.
And how about No. 480? It's “preserving virginity before marriage.”
Here’s a few highlights:
*The Gwangju Democratic Uprising of May, 1980, was voted as the No. 1 event in Korean modern history that Korean netizens wanted to be made into a movie. On May 27, about 25,000 soldiers were deployed to Gwangju, where citizens joined students protesting the new military regime. General Chun Doo-hwan had seized power in a miliary coup after the assassination of Park Jung-hee.
Martial law was expanded nationwide and pro-democracy protesters were being jailed. The event left 191 dead and 852 injured.
After this, Korea’s social movements were transformed into popular movements in contrast to those led by intellectuals in the 1970s. Some felt the actions of the troops in Gwanju was done with tacit approval from the United States, creating the momentum for Koreans to launch a movement for the withdrawal of U.S. troops from Korea.
*The collapse of the Seongsu Bridge. The collapse of the 11th bridge over the Han River on Oct. 21, 1994 killed 32 and left 71 injured. With the highest traffic volume in Seoul, the bridge collapse caused seismic shock in Korea. Ashamed Seoul residents felt like the very foundation of their lives had crumbled. The accident revealed chronic ills in society, such as a culture of white-collar corruption and lack of awareness of safety measures. “The fundamental cause was in the corruption of the construction business connected with political power,” the book says. The bridge had not been inspected for 15 years.
Korea’s rapid escape from poverty after the war ― the Han River Miracle ― has come with a price, and the bridge collapse exposed the danger of such rapid economic growth.
On June 29, 1995 the collapse of the Sampoong department store in Gangnam killed 501, injured 937 and left 6 people missing.
Other interesting topics include Sintobuli (the belief that domestic farm products are best for one’s health. The philosophy claims that one should consume food cultivated in the soil where one was born to be healthy), sasang typology, the plastic surgery craze, the well-being trend, youth unemployment, women's rights, legal prevention of the sex trade and protection of its victims, venture companies, and sexual harassment.
The book accomplishes its two-fold intent of providing an understanding of the country and serving as a messenger that gives Koreans abroad a better understanding of Korea in 2007.

The 48 Keywords that Describe Korea